The director and actress were among guests at the Chanel fashion show on Tuesday, held on a set resembling a rocket launch pad. 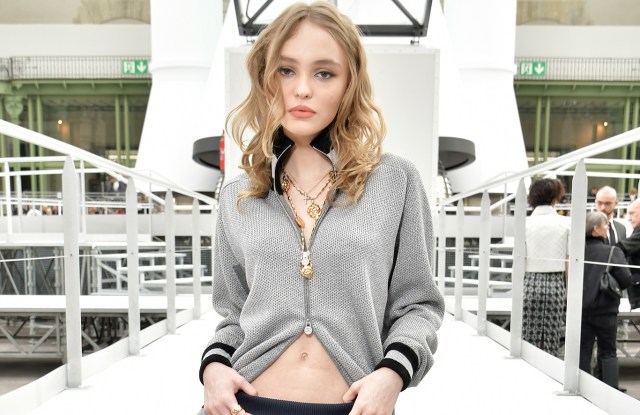 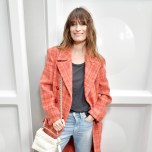 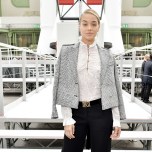 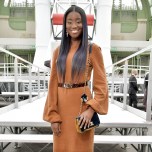 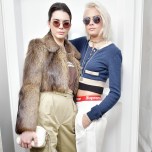 SPACE ODYSSEY: It was the talk of Paris for days, and on Tuesday Chanel unveiled the spectacular set for its fall runway show: a rocket launch pad under the glass-and-steel roof of the Grand Palais. With its flashing lights, sparks and smoke, the Chanel space rocket — which took off for the show’s finale — made for great entertainment, even if only a handful of the house’s front row guests would have accepted a ride.

“I might let people go, and then wait and see how it turns out. Maybe I’d get on the second flight,” said Lily-Rose Depp, who picked the glitter boots and quilted cocoons among her favorite items from the show.

Depp’s mother, Vanessa Paradis, said she’d be there to wave them all off. “No. No, thank you. I don’t love flying, and I’m not obsessed by space at all. I love to watch the stars from Earth,” laughed the singer and actress, who has just started work on Cécilia Rouaud’s movie, “Big Bang,” about “family dilemmas and relationships.”

Perhaps the space theme was a nod to the fact that humans may have to vacate Planet Earth at some point? “There’s always that possibility, that’s the thing,” answered Paradis. “Karl Lagerfeld and Richard Branson are way ahead of all of us.”

Lily Allen said she’d also be keeping her feet firmly planted on the ground. “I don’t like flying at all, so the thought of traveling to space is my idea of hell. Although, it depends what the state of the planet is like at the time, so maybe,” she said.

The singer has just finished her fourth album, which she described as being more “insular” compared to previous projects. “I think people are quite aware of my political views, and it’s quite difficult to work them into modern pop music. It’s a lot to do with my relationships, with my children, the disillusion of my marriage. It’s quite raw.”

Sofia Coppola said the idea of going to outer space “seems terrifying to me,” but she loved the set. “I heard that it was quite a set, but I didn’t ever expect this. I was quite surprised when the rocket started to take off,” said the director, who is at the editing stage of ‘The Beguiled,” her film based on a novel by Thomas Cullinan, starring Nicole Kidman, Elle Fanning and Kirsten Dunst. Coppola said the movie was not a remake of Don Siegel’s 1971 drama of the same name with Clint Eastwood.

“There was a movie of it, but I went back to the same book and told the story from the female point of view. I just thought it was a really intriguing premise: It’s a group of women of different ages, and it really interested me doing the story of the women left behind during the Civil War, and what it was like for them at the time,” she said, adding she hopes to get the film finished in time for the Cannes Film Festival in May. “I just wanted to take a little break from my editing to get to see this.”

A few rows down, Sigrid Bouaziz was among those ready for lift-off. “Of course. I would love to know what it’s like to see the Earth from space,” said the actress, who is preparing for her role in the musical “The Ball,” which will open at the Paris theater Le Monfort in June. “It’s a bit like ‘La La Land.’” Bouaziz also stars in Fendi’s latest film, due out later this month on the brand’s web site, in which she plays the role of Marie-Antoinette. “We filmed it in a bowling alley in Paris, and she also plays billiards in the film.”

“I would love to go to space, it’s definitely a dream of mine,” echoed Amandla Stenberg. “The show was exquisite. I haven’t seen this kind of representation of futuristic, Space Age fashion since David Bowie.” The actress has just wrapped filming “Where Hands Touch,” directed by Amma Asante, and centered on the experience of mixed-race children during World War II in Hitler’s Germany.

“It’s a really dense and intricate piece, and it’s already caused a lot of controversy, because people don’t know what it is. When we released this first image of me, as the daughter of a German woman and a black soldier, and this boy who’s [a member of the] Hitler Youth, people immediately assumed that we were romanticizing Nazis. That is not the point of the film, but I think it will bring up a lot of dynamics and questions that are important, especially in today’s global dynamic,” Stenberg explained.