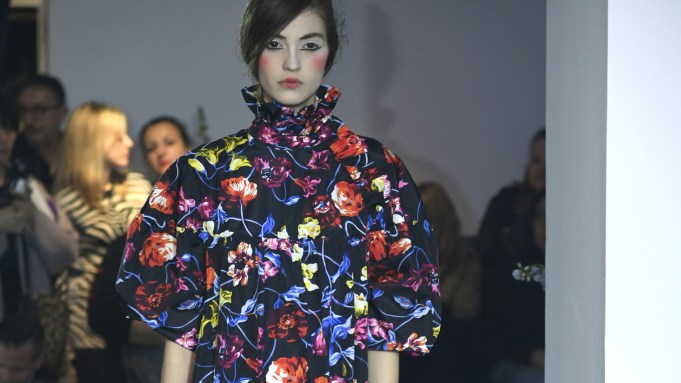 CULTURE CLUB: In Kenzo’s creative driving seat since 2011 — no small achievement by today’s revolving-door standards — Humberto Leon and Carol Lim, who until now have focused on forging the brand story forward, said they’re taking a moment to reflect and look back at the house’s rich history at the launch on Wednesday night of the first edition of a new series. It’s titled Kenzo — La Collection Memento Nº1 and is rooted in pieces from the house’s archives.

“Our intentions have never been to create a collection that feels historical, but this brand has such an incredible history in terms of Kenzo Takada coming to Paris in 1968, developing his brand here in 1970 and [showing his first collection] just down the street in Galerie Vivienne. And the story of somebody, an immigrant of sorts, traveling to Paris and establishing a home here. I think he opened up doors for a lot of people here, and he influenced ready-to-wear in such a major way in that time period,” said Leon backstage before the show.

“We are also a part of the [brand’s] history, and for us it’s about: How do we look at it in a modern and fresh way, and celebrate some of the silhouettes that people who know the Kenzo brand are, like ‘I was at a shop in the Seventies and those were my pieces,’” he said. “And a lot of people have those stories.

“We celebrate this idea of Japanese heritage [revisited], but in Paris,” added Leon. “There was that parallel he was always looking at in terms of these kimono details, mixed with almost French uniforms and that was always part of his vibe.”

The starting block, the designers explained, was a series of vibrant floral prints that featured in the house’s iconic ad campaign from the mid-Seventies by image maker Hans Feurer, combined with prints of lions, elephants and wild animals.

The event, held in the house’s headquarters on Rue Vivienne, felt like a family affair. Seated at tables throughout the space, guests including Takada, Anna Cleveland, Travis Scott and Jourdan Dunn feasted on mezze and dishes by Syrian refugee chef Mohammad El Khaldy, washed down with Lebanese wine.

A live band kicked off the action, then out clomped the models on towering platform sandals with printed socks and a run of blazing red ensembles doused in florals.

In the mix were contemporary spins on Takada’s padded kimono coats and ruffled smock dresses from the Seventies and Eighties, pajamas pairing kimono tops and silk bottoms, cute colored knits with archive stork motifs — wings outstretched — as well as the jumpsuits and cotton suiting synonymous with the brand.

Incorporating modern fabrics with tweaks on fabrications and proportions, the concise collection, which will hit stores in September, didn’t feel vintage — and that was exactly the point. The designers were looking to capture the vibrancy and fresh sense of casualness Takada brought to the burgeoning ready-to-wear scene in the label’s beginnings through elements that are “archival in essence but for today.” Prices are yet to be confirmed.

Wrapping with a concert by former Fugees frontwoman Lauryn Hill, the event’s underlying message of the positive contribution of foreigners to the culture and economy of a country like France, and the world beyond, also came through loud and clear.