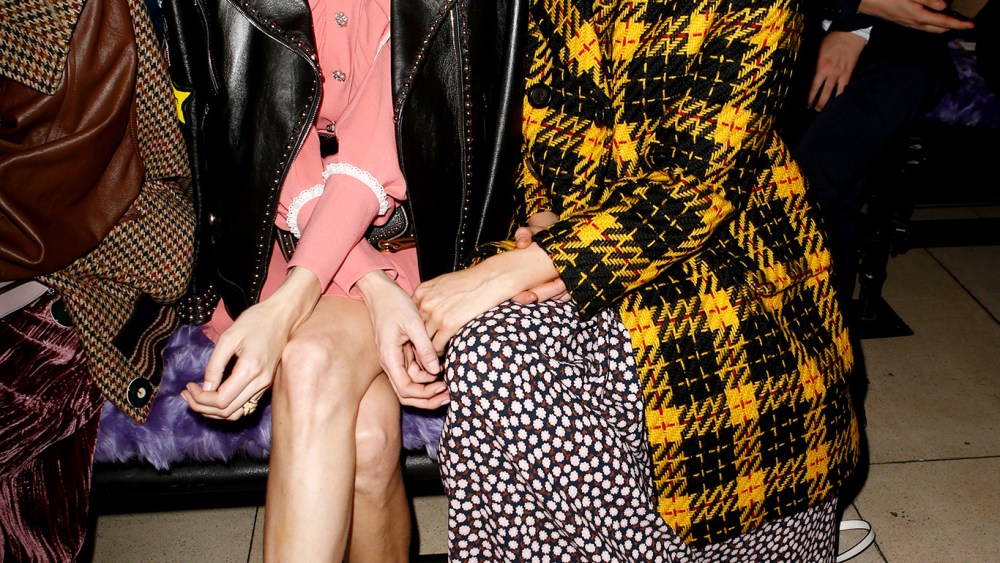 PURPLE HAZE: Guests arriving at the Miu Miu show on Tuesday were greeted by a furry purple interior to match their invitation, with the building’s walls, pillars and stairs entirely covered in the stuff.

“I like the fluffy, I’d probably have it in orange myself,” said Lara Stone.

“It’s really soft and quite hairy,” said actress Stacy Martin, the face of Miu Miu L’Eau Bleue​​, who has just finished filming the Michel Hazanavicius-helmed feature “Redoutable” and is preparing for Brady Corbet’s “Vox Lux,” where she will star alongside Rooney Mara and Jude Law.

“I love it so much, it makes me want to stroke it,” cooed Dianna Agron whose latest project, “Novitiate,” was bought at Sundance and will be premiering later this year. “It’s about nuns. It follows the process towards committing yourself fully to being a nun. I’m fascinated about the subject of faith, and what drives people to different forms. I grew up Jewish, so for me it was really interesting to get in this mind-set. But the wardrobe really helps with a project like this, because it’s very restrictive.”

Her costar Rebecca Dayan was also at the show. “The atmosphere was really powerful because we were filming in a place in Nashville that used to be a convent,” she said.

“I wouldn’t mind a little wall like this in my house, all silky softness,” said Dree Hemingway, fresh from wrapping Sam Boyd’s first feature film, “In a Relationship.” “We literally finished filming yesterday, and I got straight on a plane out here,” said the actress. “I play the more skittish one who’s not sure. You know when you’re, like, ‘Yeah, we’re seeing each other but I can’t quite commit yet.’ Which is not very me,” she said, dishing out her relationship tips. “If you’re starting one out, don’t play games.”