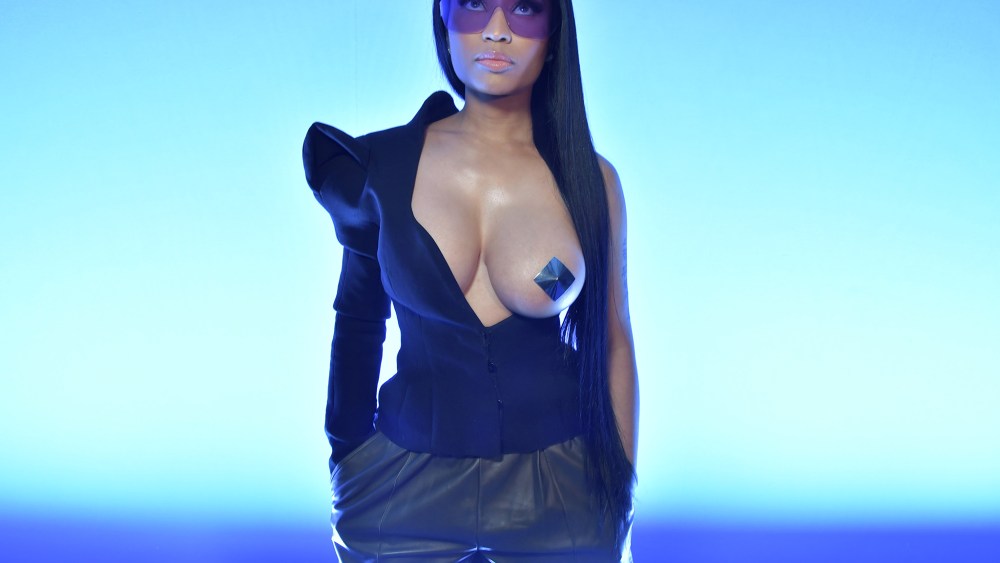 FOCAL POINT: Front-row chatter at Haider Ackermann’s fall show centered on one square-inch of silver plastic — a gleaming pasty that was the only thing standing between Nicki Minaj’s breast and the wider world.

But the best-selling female rapper was less focused on causing a stir than on stirring her own imagination. Since arriving in Paris on Wednesday, Minaj had attended fall shows including H&M, Balmain and Rick Owens.

“I’m definitely getting inspired,” the artist said. “This is a great way to get some visuals I could use in videos or in photo shoots.”

The Rick Owens show had been a high point for Minaj. “People probably think I wouldn’t like that, but I do — it was so different,” she said. As for Olivier Rousteing’s Balmain, “That’s always a movie. When I saw that show I was thinking, wow, I could take some of this inspiration out on tour.”

Minaj was perched between music producer and “How to Be Parisian Wherever You Are” co-author Caroline de Maigret and the singer Lou Doillon. During the show, Minaj perked up at the sight of an electric blue pantsuit, snapping a photo.

The model and musician Gabriel-Kane Day-Lewis took a break from recording to come out for the show. “I’ve been in the studio pretty much every single day for the past couple of months,” he said. “It’s sort of like Zayn [Malik] meets The Weeknd. Lots of vocal samples, lots of synth,” he said about his debut EP, which is slated for a 2017 release.

Irina Lăzăreanu, the former model and musical collaborator of Pete Doherty and Sean Lennon, said she was developing an exhibition to show at the Centre Pompidou in September. “It’s like a swan song to literature. It’s an homage to lyrics and poetry,” she said.