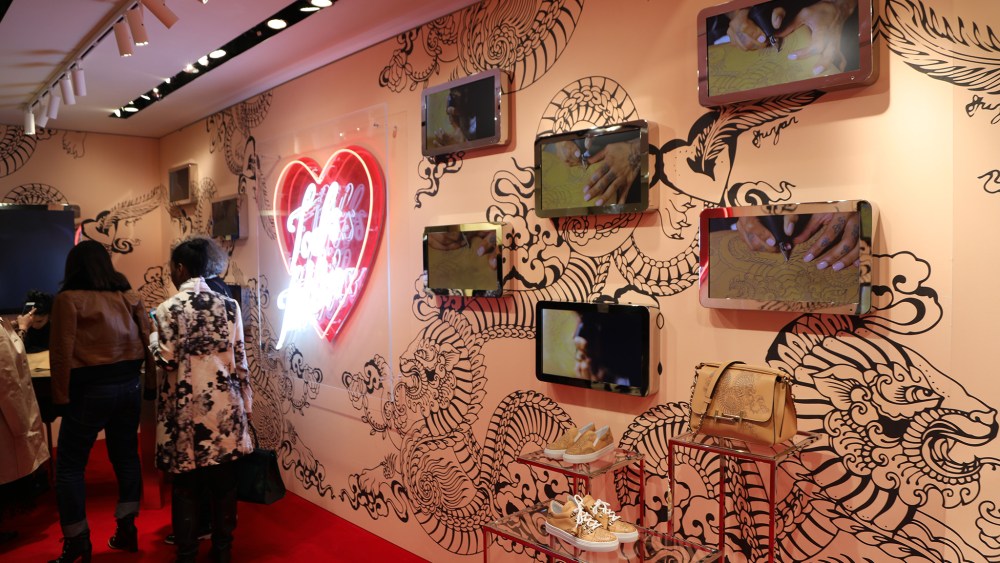 TAT’S THAT: Tattoos are a very personal thing — you either love them or hate them. But avid fans of body art and ink-elusives alike were out in force Friday evening during Paris Fashion Week to celebrate Tod’s Tattoo, a collaboration between the Italian leather-goods brand and well-known tattoo artist Saira Hunjan on a capsule collection of handbags and shoes.

First unveiled in London last September, the tie-up was celebrated with a pop-up space in the brand’s Paris flagship, complete with the U.K.-based artist’s designs on the walls, in time for fashion week.

Hunjan, aka “The Girl With the Golden Needle,” was sitting behind a table in the corner, busily tattooing away on a handbag, drowning out the babble of the crowded store with the noise of her needle.

The in-demand artist has collaborated with brands before, but this was the first time she had directly tattooed actual products. “It takes quite a long time because the leather can absorb so much ink, there’s a lot of cleaning involved,” she said. “But the leathers I can just tattoo — when you’re working on people, they complain, so maybe in this respect it’s easier.”

Tod’s SpA chairman Diego Della Valle, who jokingly tried to persuade guests to get Hunjan to create a permanent memento of the evening on their wrists, is not ready to make the leap personally, he said, but for the brand, it was another matter.

“I think it’s a fun idea for us. Don’t forget what we are: a company with a big sense of quality leather and a handmade philosophy,” he said. “She does the same thing.”

Actress and model Casta has a single tattoo, for her part. “I’m not telling you where or what it is though,” she said. “I got it when I was 18, when I had it I wanted to do loads more, but I stopped myself because I didn’t like that frenetic side, and now I don’t regret it. It’s a bit like sugar, when you eat a cookie you want to finish the box, and if you stop yourself that feeling goes away.”

Brandolini, meanwhile, had given in to temptation — she has seven tattoos around her wrists. “When you start it’s hard to stop, but mine are really little. They represent particular moments of my life,” she said.

Farida Khelfa, Inès de la Fressange and Bruno Frisoni all agreed that permanent body art was not up their street. “It’s not my thing,” said Khelfa. “Everyone does what they like, but for me, no.”

Frisoni said, “I’ve just been told the new trend is not to have any tattoos at all. I’m a rebel right from the start!”