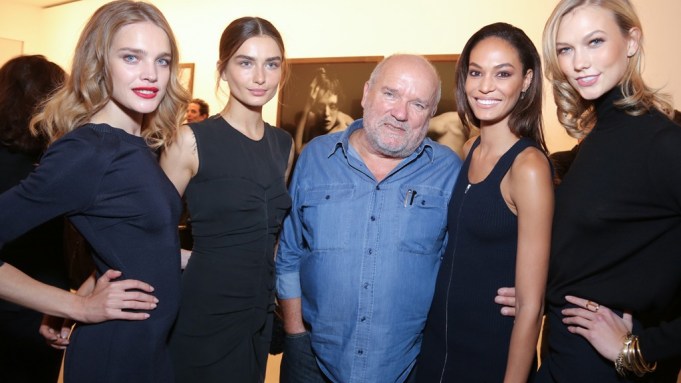 RIGHT ANGLE: The fashion community feted the opening of Peter Lindbergh’s exhibition at the Gagosian Gallery in Paris Thursday night.

Paolo Roversi, Peter Dundas, Nicholas Kirkwood and a flurry of models — like Natalia Vodianova, Karlie Kloss, Joan Smalls and Andreea Diaconu – were among the attendees.

The show features large-scale works emphasizing the glamour of Lindbergh’s models such as Kate Moss and Nadja Auermann.

“It’s hard to make a choice that identifies you. The exhibition tells who I am,” said Lindbergh of his edit.

“We have never worked together, but he is part of my fashion culture,” said Emilio Pucci designer Peter Dundas. “I think his work is integrated in all designers’ works in a way.”

“We arrived in Paris and started at the same time, in 1973, along with Steve Hiett,” said Roversi. “We are the musketeers.”

For his part, Roversi has a book in the works on Vodianova.

“We have been friends since the beginning,” Lindbergh added. “In fact, Paolo came over for dinner last weekend.”

“I like the idea of abstract works mixed together with models, etcetera,” said Vodianova while taking in the show.

“His photos are timeless,” mused Kloss, who recalled her first shoot with Lindbergh at age 18. “It was for the American Vogue, with Tonne Goodman. We were running in the streets of New York.”

Diaconu shared a memory of a more adventurous shoot with Lindbergh: “I burned my leg. It wasn’t his fault. It was very hot outside, in Joshua Tree.”

Pilotto, meanwhile, stays at another hotel with a promising name while in Paris – the Hotel Amour in the Pigalle neighborhood.