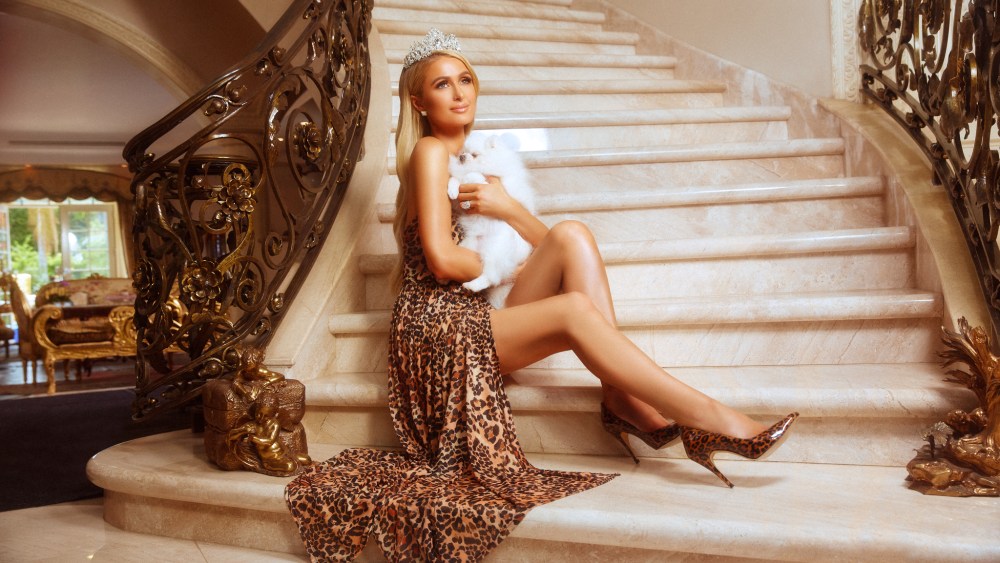 Paris Hilton has codesigned a summer collection for Boohoo.com, the U.K.-based fast-fashion e-tailer, set to launch globally June 20. The Boohoo x Paris Hilton collection features a range of ready-to-wear and swimwear that reflects her favorite trends and fashion moments from the early Aughts.

Animal prints, slinky metallics, palm prints inspired by her hometown of Beverly Hills, and cheeky slogan pieces with her mottos such as “That’s Hot” comprise the 70-piece collection. Products retail from $15 to $70.

Hilton, the 37-year-old entrepreneur, TV personality, model, author, DJ and singer, told WWD that she discovered Boohoo.com on Instagram “and loved all their cute styles, designs and accessories they make.” She described the Boohoo collaboration as “very Paris, inspired by my life and style, the early 2000s, Beverly Hills and Ibiza.”

Natalie McGrath, vice president of marketing at Boohoo USA, explained, “What we were seeing coming through with all the trends this year was a throwback to the Nineties and the early 2000s. We wanted to home in on that trend and own it from a collaboration standpoint. What better to follow with an icon from that era, Paris Hilton.” She said the retailer has been expanding its collaborations, and earlier this year worked with Zendaya on a very Nineties-inspired collection.

For the lineup, Boohoo took inspiration from some of Hilton’s iconic looks such as a silver dress, which she wore in her 20s to a chain mail top, which takes inspiration from the dress she wore to her 21st birthday party. The collection also has a lot of palm prints, which are inspired from the Beverly Hills Hotel, where they held their first design meeting. There’s also inspiration from her dogs and some kitsch items. “It’s very Paris in terms of its design and aesthetic,” McGrath said.

Asked whether these influencer and celebrity deals really move the needle for Boohoo, McGrath said, “Different influencers have various degrees of impact on our business. We most definitely built our business in the U.S. off of social media influencers. Holistically, they absolutely do move the needle.” She believes Hilton will also resonate globally. After a Los Angeles launch event on June 20 they’re flying to Paris for a “Paris in Paris” event on June 26, McGrath said.

“Our international expansion is something we’re very much focused on,” McGrath said. She noted that the retailer is starting to take a more global approach to these collaborations, in addition to doing local ones. “This influencer piece is becoming so important to the growth of our overall business globally,” she said.

Overall, Boohoo.com plc, which includes Boohoo, BoohooMan, Nasty Gal and PrettyLittleThing, had revenues of 579.8 million pounds for fiscal 2018, up 97 percent. Of that, Boohoo generated 374.1 million pounds for fiscal year 2018, ahead 32 percent from the prior year. Specifically, Boohoo had 6.4 million active customers, a gain of 22 percent from the prior year.

Like previous Boohoo influencer collaborations such as those with Charli XCX and Jordyn Woods, Hilton was very involved with the design, McGrath said. “We shared mood boards, she shared mood boards. She was very specific in terms of colorways she wanted, even down to the length of dresses and there were various iterations along the way. Someone like Paris has got a very credible, long-term career, so she wants to make sure everything is completely on brand, so she was involved heavily,” McGrath said.

She added that the collection is for one season only at the moment. “We don’t tend to commit to more than one season. We like to keep the momentum across different collaborations,” she said.

The collection will be amplified with an ad campaign that was shot in Beverly Hills at a private home and styled by Sammy K. and photographed by Charlotte Rutherford. Hilton posed in some photographs with her famous dogs Diamond Baby and Princess, while wearing styles from the collection. Additional elements from the campaign include throwback flip phones, a vintage pink convertible and flashy accessories. Boohoo has produced eight weeks’ worth of video content that will roll out on digital and social media.

“I love working with them, everyone on their team is so amazing and passionate about the project we are doing together. I had the best time on set shooting the campaign,” said Hilton, describing the collection as “so hot.”

The collection has a specific logo and packaging, and Hilton’s name is on the hangtags but not on the back of the clothes.

McGrath said she was pleased with how the collection turned out. “I think it’s really fun, young, it’s very current. I think it will do very well commercially. The prints are very on trend and there’s something for everyone. There’s swim, there’s dresses, more casual track suits. I think our design team, along with Paris, have done an excellent job with it,” McGrath said. The design team is based in the U.K., while manufacturing is done in different factories and wholesale partners around the world. A large portion is U.K. based, which enables a very quick turnaround time. They also have partners in Asia, but a lot of the sourcing is U.K. based, she said.

McGrath said Boohoo’s customers in the U.S. range from 21 to 24, but globally they have both a younger audience and an older audience. The company has been in the U.K.  for 10 years so the audience has grown up with them. In Europe, the range can go  from 13 or 14 to their late 20s or early 30s. “They know the brand and they’re loyal,” she said.

In addition to the launch parties in Los Angeles and Paris, Hilton will be promoting the collection throughout the summer during her DJ events in Ibiza. She also has loyal followers, which she calls mini Hiltons, and she will be engaging with them, as well as Boohoo fans to promote the line.

McGrath described Boohoo’s current business as “very good.” She said the year was “incredibly healthy across the whole group.” PrettyLittleThing is doing very well, as is Nasty Gal. “Our international growth across Europe and the U.S. is growing rapidly. We’re very pleased with the trajectory we’re on,” she said.

Carol Kane, chief executive officer of Boohoo.com, said, “Paris is everything the Boohoo girl is and we can’t wait to have her on board with us this summer.” She said the summer ad campaign gives a nod to Hilton’s style which she thinks will resonate with Boohoo’s customers.

Following a strong start in global sales this year, and a successful global partnership with Zendaya, Boohoo.com has been capitalizing on opportunities in the influencer sphere to bridge the gap between product and their core customer. Since 2016, Boohoo.com has launched successful campaigns and design partnerships with Zendaya, Jordyn Woods, Charli XCX, Stella Hudgens and Chantel Jeffries, as well as young celebrities such as Sailor Brinkley Cook and Elisa Johnson.

See Paris Hilton’s most iconic looks throughout the years here.