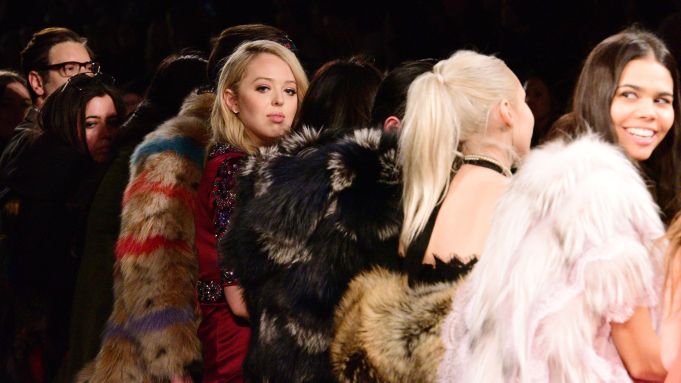 The sweltering temperature at Dennis Basso’s show Tuesday seemed like a cruel joke on the many fur-clad guests — and runway models — within the gallery at Skylight Clarkson Sq.

“It’s hot as blazes in here,” exclaimed one front row guest while Paris Hilton hurriedly reapplied powder to her glistening complexion. Outfitted in a leopard print jacket, the fragrance maven and DJ, 35, sat alongside sister Nicky Hilton Rothschild, 33, but don’t expect to see either heiress in one of Basso’s sumptuous authentic animal skin creations.

“I only wear faux fur,” Paris explained. “I’m an animal lover and just got a new puppy named Diamond Baby. She’s a micro-mini tiny teacup chihuahua, but she’s back in L.A. because New York is too cold for her.”

Rothschild — who rushed out of the afternoon show to start a four-hour lasagna recipe for her husband in celebration of Valentine’s Day — vehemently asserted: “I do not wear fur.”

Surrounded by a swarm of Secret Service agents, Tiffany Trump, 23, in a grownup crimson cocktail dress, made a last-minute entrance seconds before the runway was cleared, which caused many to make an audible observation of her arrival.

Basso, who has known the youngest Trump daughter almost all her life, noted how adult she suddenly seemed in her new role.

“She was placed in a special holding area backstage with all of her security right up until we were ready to begin,” revealed the charismatic designer.