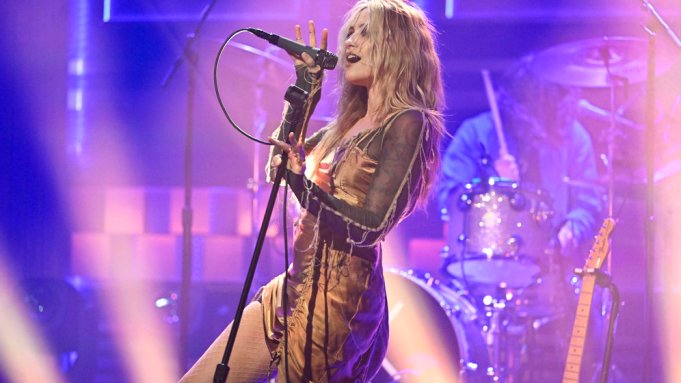 Paris Jackson is performing her new song in style.

The singer appeared on “The Tonight Show Starring Jimmy Fallon” on Tuesday to promote her Nirvana-inspired, new single “Lighthouse.” For the performance, she wore a nude dress with mesh sleeves by Matacomplex. She paired the look with black patent combat boots by Dr. Martens and nude fishnet tights.

Speaking with Rolling Stone about her new single, she said the song was paying homage to Nirvana. Its accompanying music video, which was released last month, is particularly inspired by the famous band’s song “Sliver.”

Jackson is the second child and only daughter of the late Michael Jackson and Debbie Rowe.

In 2020, she signed with Republic Records, dropping her first single called “Let Down” that October. She released her first album, “Wilted,” the following month.

She named the album “Wilted” in honor of the duality between love and heartbreak.

“I feel like that’s something that everybody can relate to in their own way. I love the idea that love is a flower that blooms, and if it’s not taken care of, as anything, it will wilt, it will die,” she told WWD in 2020. “And sometimes that’s just a part of life. I love metaphors and the flower was the perfect metaphor for this. And the mushroom is my new thing. ‘A decay as an extant form of life.’”

Jackson’s music sounds nothing like her father’s — or her aunts, or other relatives, for that matter. She says she gets inspiration from all around her, be it the classical composers she grew up listening to or the Motown, Beatles and soul that played around the house.

“I feel like that’s always going to influence me in some way, because that is a part of my foundation,” she said. “That’s the soundtrack that was playing when I was developing as a human being. But for this specific sound I was going for Radiohead and Manchester Orchestra were the main influences for the sound.”