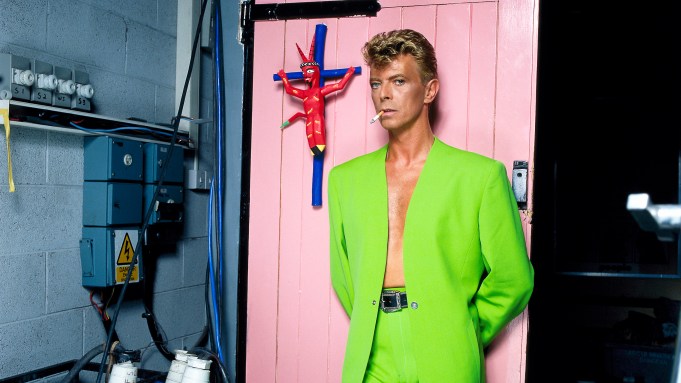 HEAVEN SCENT: The Musée des Arts Décoratifs has released details of its eagerly awaited retrospective on designer Thierry Mugler, which will include an entirely new section dedicated to his bestselling fragrance, Angel.

As reported, the “Thierry Mugler: Couturissime” exhibition is now scheduled to run from Sept. 30 to April 24, 2022, at the Paris museum after being delayed due to the coronavirus pandemic.

The display, which made its debut at Montreal’s Museum of Fine Arts in 2019, will be spread over two floors in the newly renovated Christine and Stephen A. Schwarzman Fashion Galleries. Curated by Thierry-Maxime Loriot, it will include digital performances by entertainment and audiovisual professionals.

“The exhibition, organized in several acts like a classic opera, thematically blends costumes, animated projections, photographs and music, creating varying atmospheres that personify the numerous projects Mugler has championed since the end of the 1970s,” the museum said in a statement.

It will open with an aquatic-themed room, and take visitors through Mugler’s creations inspired by robots, insects and automobiles. This leads to the segment dedicated to Angel, launched in 1992, “an olfactory revolution that launched the trend of high-end perfumes,” the museum said.

On the second floor, a photography section will feature rare prints by the likes of Guy Bourdin, Karl Lagerfeld, David LaChapelle and Ellen von Unwerth, as well as Mugler’s collaboration with Helmut Newton. It also features Mugler’s own campaigns, shot in locations including the Sahara desert and the rooftop of the Paris Opera.

Other highlights include the outfits worn by top models including Linda Evangelista in George Michael’s music video for “Too Funky,” which Mugler directed in 1991, as well as costumes he designed for the stage. “Mugler’s distinctive style transcends fashion, having influenced generations of artists to this very day,” the museum concluded.

The show has also made stops at the Kunsthal in the Dutch city of Rotterdam, and the Kunsthalle in Munich, Germany.

How Cardi B Came to Wear Vintage Mugler at the Grammys