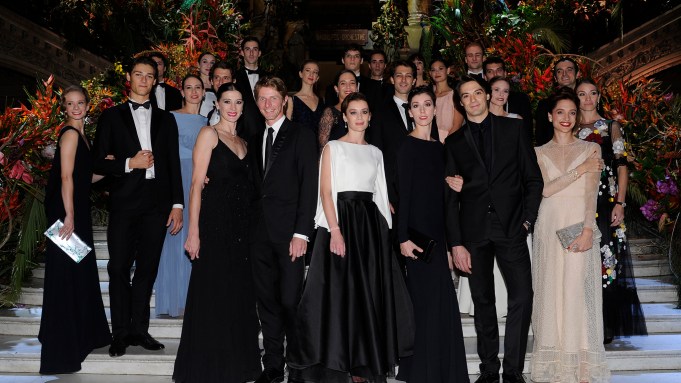 CULTURE CLUB: Oh, what a night. On the eve of Paris Fashion Week, designers including Haider Ackermann, Isabel Marant, Alexis Mabille and Vanessa Seward put down their scissors to attend the opening gala Saturday for the 2016-17 season of the Paris Opera Ballet — the world’s oldest ballet company — under the helm of Stéphane Lissner, director of the Paris Opera, and its new director of dance, Aurélie Dupont, who replaces Benjamin Millepied.

The grand staircase of the Palais Garnier was ablaze with exotic plants dotted with stuffed peacocks, with André Saraiva and Alexandre de Betak behind the night’s Henri Rousseau-inspired decor.

Somebody was still in work mode, however. Doing research in the audience was British actor Ralph Fiennes, who is to direct a film on the Russian ballet dancer and defector, Rudolf Nureyev, who took over as director of the Paris Opera Ballet in 1983.

Opening with the traditional Défilé du Ballet parade, the curtain lifted to reveal the stage opened all the way back to the cavernous Foyer de la Danse hung with giant chandeliers, from which the entire company — gathering the Étoiles, dressed by Dior, Premiers Danseurs, Corps de Ballet and the students of the Paris Opera Ballet School — proceeded in lines to the front of the stage to music by the Paris Opera Orchestra under the direction of Maxime Tholance.

The audience took in a new work by William Forsythe as well as the first creation for the company by Canadian choreographer Crystal Pite, starring Marie-Agnès Gillot, a darkly beautiful work that was met with a rapturous standing ovation.

“I was fascinated by that second piece; William Forsythe tonight was upstaged. Somebody must be in a bad mood back there in his dressing room, it was very unexpected,” teased Jean-Paul Goude who on Wednesday will present his Holiday Collector collaboration with Lacoste.

“What luck, what beauty, I haven’t seen anything as exciting since the ballet company of Pina Bausch came back to perform ‘Viktor.’ But this was staggering, beauty like the crabs on Easter Island. So wonderful to have that many dancers — and that many male dancers. Very, very moving.” said Jane Birkin who in a couple of weeks will be heading to Warsaw, Poland, to kick off a world tour where she’ll perform songs by Serge Gainsbourg.

“A beautiful show, such grace. And their bodies — it was like they were being pulled on strings,” cooed Eva Herzigova, who had flown in from Milan where she had walked the Bottega Veneta show that morning. So, did she ever have aspirations to become a ballerina? “No, I never did, I remember the girls who used to do it, they always had a funny kind of duck walk,” laughed Herzigova who stars in a new documentary about Manolo Blahnik, “Manolo (The Boy Who Made Shoes For Lizards),” due to be presented at the Berlin International Film Festival in February.

The gala was sponsored by Christian Dior Parfums and Rolex.

After the performances, the crowd moved up to the Grand Foyer for a supper orchestrated by Le Fooding with three ambassadors of the French gastronomy revival: Alexandre Gauthier, Katsuaki Okiyama and David Toutain.

The star dancers slipped into seats at tables, much to the delight of the crowd, as waiters circled through the space carrying trays of food. “I’m proud of you, you made me dream, you moved me — now let’s celebrate,” said an emotional Dupont, addressing the room. During the dinner she revealed plans to continue ballet’s long tradition of collaborating with fashion designers. “I love fashion and I think it’s really good to have families of dancers and fashion designers, I have many ideas and already some concrete projects in view,” she told WWD. “Karl Lagerfeld just did a wonderful job on the costumes for ‘Brahms-Schönberg Quartet’ at Opéra Bastille and in terms of upcoming collaborations, Christian Lacroix will be working on new production of ‘A Midsummer Night’s Dream,'” she said.

“It’s a very beautiful old institution and they asked us to be part of it and let us have fun,” said Saraiva, leading revelers downstairs to the after party in the Rotonde des Abonnés, where a taxidermy tiger greeted guests. The graffiti artist and entrepreneur in October will complete another cultural project that he’s been working on over the past two years: a 200-meter-long wall next to National Pantheon of Santa Engrácia in Lisbon, Portugal, that he has covered in 55,000 hand-painted tiles. “It’s my own Sistine Chapel,” said Saraiva. “I can die after this.”