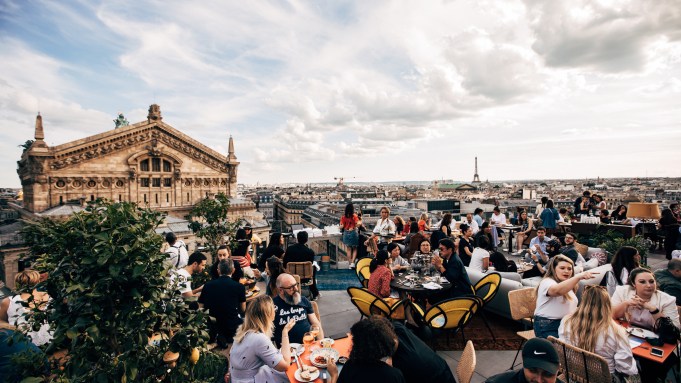 Paris is on fire — and that’s not just temperature-wise. From new shops, restaurants, spas and art exhibitions, the city is a hotbed of newness. Here’s a selection of where to go during this summer’s couture season.

NEW LEGACY: The Hôtel Barrière Fouquet’s Paris has a new retail space, called Legacy. Set up by Bow Group and Sébastien Chapelle, who formerly headed the watches and high-tech offer at Colette, the space sells high-tech grooming tools from Dyson and Braun; exclusive watch models from labels such as Corum and Casio G-Shock; jewelry, and books by Rizzoli and Taschen. Interior decorator Jacques Garcia designed the plush space, which is tucked next to the Marta bar, with red moiré curtains and a purple carpet. — Mimosa Spencer

HITTING THE TOWN: An eighth-floor rooftop bar, an arty terrace and a former train station transformed into a colorful restaurant: This couture season, Paris is teeming with exciting new spots to let off steam in between shows.

After a bit of shopping at Parisian department store Galeries Lafayette, head to the eighth floor of the building to take in the spectacular panoramic view of the Opéra Garnier and the Eiffel Tower at Créatures. It’s a new bar and restaurant created by chef Julien Sebbag, who learned his craft at Israeli restaurant Miznon. The vegetarian menu at Créatures uses seasonal produce — some of it grown in the site’s vegetable garden — for its Mediterranean dishes, including zucchini focaccia, roasted cauliflower and peaches with feta, to be washed down with surprising vegetable-based cocktails.

The Hôtel de Crillon is celebrating a special anniversary: The Negroni, the infamously strong gin, red vermouth and Campari cocktail, turns 100 this year. The Parisian palace has tapped artist Alexandre Benjamin Navet to create a spectacular set for the terrace of its Yacht Club bar — including a monumental cardboard yacht, inspired by the world of sailing — the perfect setting to sip one of the emblematic cocktails of “la dolce vita.”

A new restaurant is adding a bit of color to the 16th arrondissement. The brightly patterned and Latin-inspired interiors of La Gare were created by hip decorator Laura Gonzalez, while Peruvian chef Gastón Acurio has taken over the restaurant’s kitchen. La Gare, which was built in a former train station, boasts two huge terraces and a fun mix of culinary inspirations, from shrimp-cilantro dim sum to crispy tacos and spicy ceviche.

If you ever need an excuse to order dessert, here’s a good one: Jessica Préalpato, the head pastry chef at the Alain Ducasse restaurant at the Hôtel Plaza Athénée, has just been named The World’s Best Pastry Chef for 2019. Her concept of “desseralité” — delicious desserts based on seasonal fruit and low in sugar, wheat and cream content, such as rhubarb served with elderflower jelly or fig leaf ice cream — won over the jury. — Fleur Burlet

HOTEL HAUNT: The historical Hôtel du Louvre has finally reopened after two years of renovation. The hotel, which dates back to 1855 and is now owned by Hyatt as part of its Unbound Collection, is ideally located at the intersection between its namesake museum, the Palais Royal gardens and the Opéra Garnier. Its 164 rooms and pristine white-and-gold lobby are decorated with hints of Second Empire chic, in reference to the hotel’s founder Napoleon III. — Fleur Burlet

PAMPERING PAUSE: On the hunt for a new spa? The EN beauty salon just officially opened its doors on the Left Bank, not far from the Place Saint-Sulpice in the 6th arrondissement.

EN’s more than 80 products were made for the spa — including essential oils, a cleansing balm and moisturizers in various textures — which are meant to be mixed according to a person’s needs. The items have formulas including extracts of organic plants grown in Japan.

“We’re not trying to fit anybody into a box,” said Goh Hirose, director of EN beauty salon.

The spa’s treatment menu has at its core facials, with the 85-minute Linn signature facial going for 180 euros, and the two-hour Sui deep treatment facial priced at 220 euros. On offer, too, are facials paired with reflexology and body massage. — Jennifer Weil

FLORENTINE FRAGRANCE FOCUS: Santa Maria Novella now has a home away from home in Paris. The Florentine fragrance seller dating from the 13th-century opened its first freestanding outpost in Paris. It’s billed as a cabinet of curiosities, located just a stone’s throw from Le Bristol Paris hotel on the tony Rue du Faubourg Saint-Honoré.

In the 410-square-foot space it possible to find the brand’s full range of products, including perfumes, home fragrances, teas and infusions. The boutique’s interior decor, with its multihued marble, central table lined with scents, stately wooden-and-glass cabinets and gilded chandelier, nods to the original Santa Maria Novella apothecary in Italy. — Jennifer Weil

MOONLIGHT: Celebrating the 50th anniversary of the first human landing on the moon, the Grand Palais is shedding light on the influence of earth’s satellite on the arts over the centuries. This thorough exhibition is a journey from antiquity through until today, and includes scientific materials.

There is no better home than the Fondation Louis Vuitton for European artists Gilbert & George’s monumental charcoal on paper sculptures. The foundation’s vast rooms are also hosting several of the pair’s other works from the Seventies, offering the viewer an immersive experience, a process in which the artists were fully involved.

Lights are out at the Maison Européenne de la Photographie, where there are captivating shows presenting dark atmospheres. The oeuvre of American photographer Henry Wessel’s is on view with three series of his black-and-white shots, while selected works from the museum’s permanent collection, with the likes of Robert Doisneau and Larry Clark, examine the film noir genre that conveys similar mysterious vibes.

The Centre Pompidou offers an exciting opportunity to discover Dora Maar’s fascinating career, emphasizing that she was more than just Pablo Picasso’s lover. The retrospective devoted to the prolific photographer and painter comprises nearly 400 works, and relegates her muse status to the background.

Together with the Wallach Art Gallery of New York’s Columbia University, the Musée d’Orsay is examining the important role of black people in art history, including as models, artists or other key figures, in the birth of modern art. From the French revolution to the avant-gardist times of the early 20th-century, paintings — with Édouard Manet’s “Olympia” being the show’s highlight — and photographs explore the subject of identity along with contemporary creations, such as Glenn Ligon’s unique neon installation.

Last but not least, art dealer Larry Gagosian is contributing to the renovation of Notre-Dame cathedral by showcasing donated works from the artists he represents — a few of them, like Theaster Gates, Rachel Whiteread and Takashi Murakami, produced special items for the occasion — with proceeds going to help rebuild the damaged monument. — Anne-Aymone Gheerbrant