A cocktail party celebrated the partnership between Backes & Strauss and Waskoll. 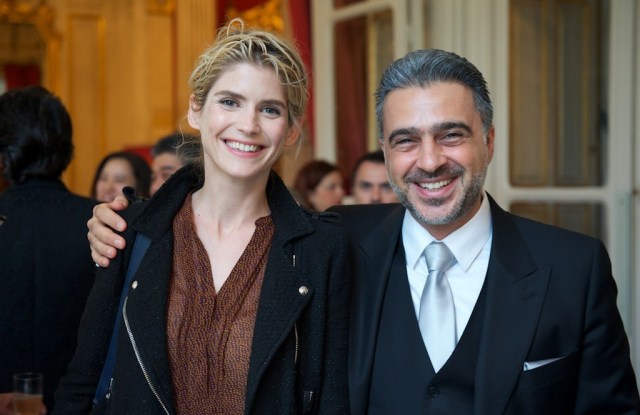 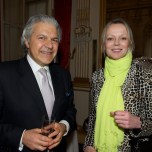 ALL THAT GLITTERS: British diamond and watch company Backes & Strauss and French jeweler Waskoll celebrated their partnership with a cocktail party on Thursday at the residence of Britain’s Ambassador to France, Sir Peter Ricketts.

The two firms joined forces in 2012, with Waskoll becoming the exclusive French distributor for Backes & Strauss timepieces, which are made in Switzerland by the Franck Muller Group.

The event provided a rare glimpse of the glittering watches, displayed in glass cases dotted through the venue’s gilded hallways. The crown jewel in the pack was a Men’s Royal Berkeley watch set with 330 diamonds weighing 87.45 carats, priced at a cool 1.5 million euros, or roughly $2 million at current exchange.

Vartkess Knadjian, president of Backes & Strauss, said he had known brothers Cyril and Kirk Waskoll for 20 years, having previously supplied them with diamonds, and could think of no better partners to enter the Gallic market.

“The French and the English have always had a love for each other. They’ve had tiffs, sometimes wars,” he mused.

“Today a presence in Paris is very, very important, not just to tap into the French market, but France has got a fascinating high-end tourist industry and we want to be able to be present here to benefit from their business.”

Watch brands have been sprouting up all over town, and competition in the segment is about to become even more intense with the opening this month of a huge Carl F. Bucherer multi-brand flagship on Boulevard des Capucines.

Kirk Waskoll, chief executive officer of Waskoll, said Backes & Strauss was the first and only watch brand carried by the jeweler, which has a store on nearby Rue de la Paix. With its tagline, “Masters of Diamonds since 1789,” Backes & Strauss stands out from the rest of the luxury watch pack, he added.

“We have the same passion for stones, and this collection totally fits with our identity and our logic. We are jewelers and, by definition, that is all we know, and these are jewelry watches,” said Waskoll. “It’s a little eccentric, perhaps, but it’s a perfect match.”