Brand is paying homage to the Central Park Conservancy and the 30th anniversary of the Frederick Law Olmsted Award luncheon. 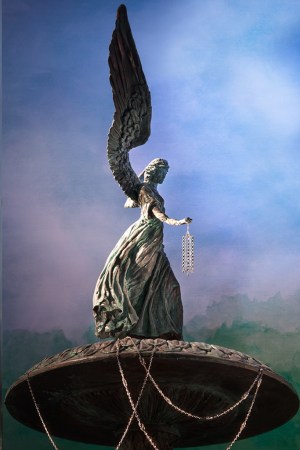 PARK VIEW: Tiffany & Co. is paying homage to the Central Park Conservancy and the 30th anniversary of the Frederick Law Olmsted Award luncheon with a slew of newly styled windows at its New York flagship on Fifth Avenue. Dedicated to Central Park’s greenery, Tiffany unveiled five window displays Tuesday that meld the romanticism of the park with the brand’s jewelry.

The first window on Fifth Avenue features the Conservancy Garden’s intricate wrought-iron gates. Other windows depict an aerial view of the park, showing Tiffany’s flagship and The Great Lawn, scenes of the park’s dairy and lakes, the boathouse, the angel of the Bethesda Fountain, a vibrant garden of tulips and an aerial view of the reservoir and upper sections of the park. Passersby can catch a glimpse of the window displays until May 6.