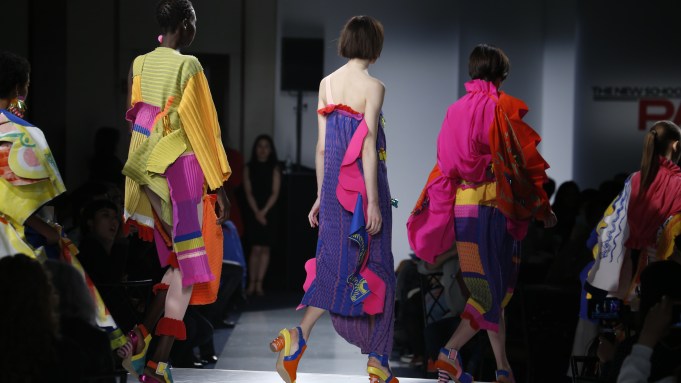 The New School’s Parsons School of Design held its 69th student fashion show for its 2017 fashion BFA graduates Monday at Pier 60. Of the roughly 320 graduates, 32 were selected to show looks from their thesis collection in front of family, friends, fellow students and press, as well as members of the jury who select which students can present on the runway.

A broad range of aesthetics were represented. Jeremyn Lee explored his Chinese-American heritage through feminized sportswear; In Nei Hoi examined metamorphosis in a series of white pieces that ranged from knits to elaborate floral embroidery, while Chia Lee showcased finely detailed textile work.

Burak Cakmak, dean of Parsons School of Fashion, noted that a common thread among this class of graduates “is seeing that gender is disappearing in some ways,” Cakmak said. “You see some of the garments being on both men and women, and even when we talk to the students, it’s not just the one person but everybody in the class is really about having a different idea of gender and identity. It’s very much reflected in their collections. It’s much more experimental, pushing boundaries but not necessary typical concepts about what a male versus a female looks like.”

Cakmak also noted that a big focus of the program was to prepare the students to build full collections, not just ready-to-wear, but also shoes and accessories. “They’re creating a whole look,” he said. “They want to turn into more of a lifestyle designer.”

At the end of the show, three awards were given out in conjunction with Parsons partners. The first was the Kering Empowering Imagination Award, which went to Emma Cleveland and Ji Won Choi. Safilo gave an award to Olivia LeBlanc, and through a partnership with Yoox, Sarah Ann Gillies, will have a six-month paid internship at Yoox headquarters in New York.