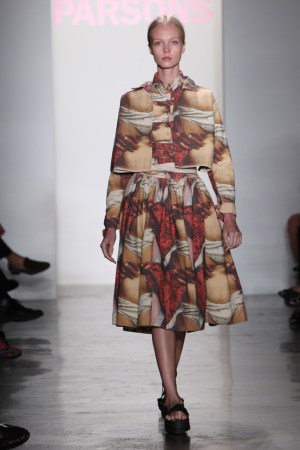 The First Eighteen: Parsons The New School for Design presented thesis collections on Saturday by the first 18 graduates from its new Masters of Fine Arts in Fashion Design and Society. The interdisciplinary program was initiated two years ago by Donna Karan, and with nearly 150 looks, the show at Milk Studios never felt dull. Knitwear was a strong point here, with standouts including Talia Shuvalov, who brought a new dimension to gray sweats by adding textural knit panels to the looks, and Paula Cheng, whose draped and twisted designs added an evening touch to yarns.

Karan, in the front row, said she was impressed. “Each one has their own distinctive style,” she said. “Their thoughtfulness has artistry and intelligence. They’re not capturing a trend, but you see their personality.”

This story first appeared in the September 10, 2012 issue of WWD. Subscribe Today.
You're missing something!
SUBSCRIBE NOW