Dev Hynes performs at the gala celebrating the opening of the Virgil Abloh exhibit at the MCA.

CHICAGO FETES ABLOH: It was Kanye West’s birthday, so he was a no-show, but Takashi Murakami, Chance the Rapper, Cherry Fukuoka, designer Jerry Lorenzo and Dev Hynes, who performed a live set on a white piano, turned out Saturday night to celebrate Virgil Abloh’s “Figures of Speech” exhibition at the Museum of Contemporary Art Chicago.

Hosted by ArtEdge, the “Celebrating Virgil Abloh” gala provided guests — who also included Louis Vuitton chairman and chief executive officer Michael Burke; Michael Darling, chief curator at the MCA; Samir Bantal, director of AMO; artist Nick Cave; video artist and cinematographer Arthur Jafa; No Vacancy Inn founder Tremaine Emory, and designer Azeeza Khan — an exclusive peek at the exhibition, which opened Monday. West flew in solo a few nights before for a private tour of the displayed works with Abloh and reportedly gave a talk at a museum dinner about how culture will save the world. 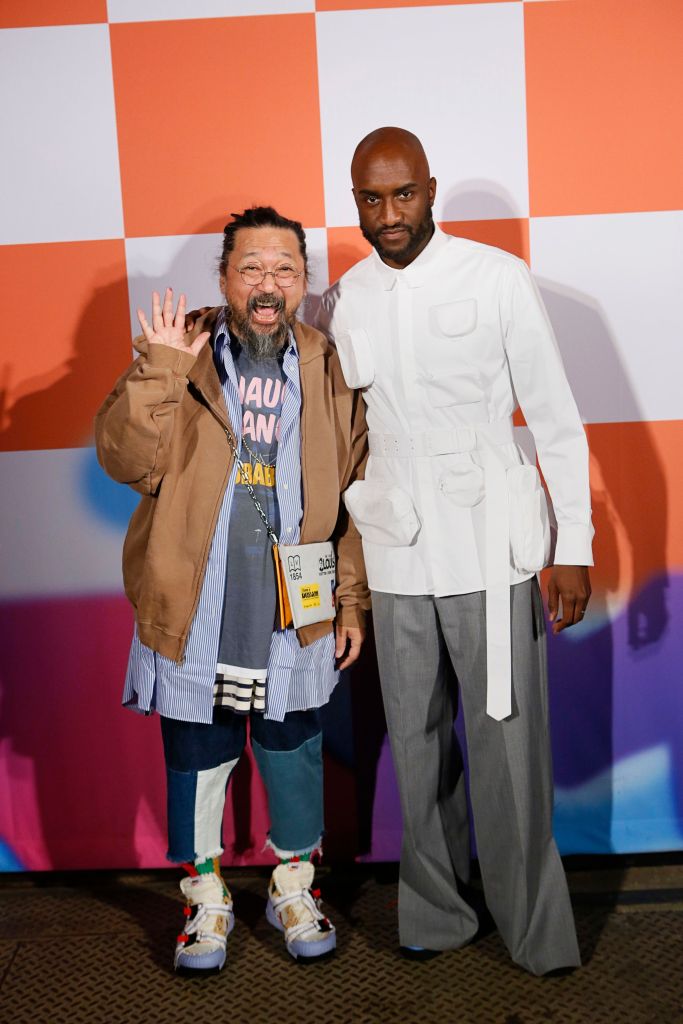 More than 650 guests attended the ArtEdge gala, raising $2 million, with proceeds benefiting the MCA’s efforts to provide a platform, workshop and performance space for Chicago’s youth.

With an urban theme, gala-goers, dressed in everything from Louis Vuitton — like the man of honor — to Off-White, printed dresses and formal suits to casual dresses and jeans, entered through the loading dock. A freight elevator with an oversize chandelier decked out with orange parking cones transported everyone to the cocktail party upstairs. The dinner took place in the museum’s two-level parking garage, done over for the evening with floor-to-ceiling images of exhibition renderings and original garage signage.

It wouldn’t be an Abloh dinner without quotation marks and attendees were given the option of choosing black cloth tags to adorn their outfits with safety pins that read “Purist” or “Tourist” in white capital letters.

Longtime Louis Vuitton collaborator Murakami, whose exhibit “The Octupus Eats Its Own Leg” took place at the MCA two years ago, said “Figures of Speech” is “amazing,” as Abloh has succeeded in merging the art and fashion worlds.

“He’s broken through the wall that it seemed like someone could do, but couldn’t break before so it’s amazing,” said Murakami, through the help of his English translator, adding that Abloh is popular in Japan and Asia. “The past 10 years, the people in the creative scene, like Virgil himself and Kanye West, and he’s actually finally done it.”

Nick Cave toured the exhibit in private Friday evening. “It really looks great. It really provides you with sort of a raw overview of his sort of position between architecture, fashion and design,” said Cave, dressed in all black, wearing a Rick Owens leather skirt. “I think it’s about seeing a person of color in that position and now, not only is it fashion, now we’re bringing it into the museum setting. It’s really sort of living between these two worlds, art and fashion, which once comes first? It’s what we’re all trying to do.”

Chicago designer Khan, wearing a lime-green gown she custom-dyed to match her Nike x Virgil Air Max sneakers, said Abloh has always been a “vanguard of culture” in the Chicago community. “He has continually separated himself from convention and has controlled his own perception, which is actually a really hard thing to do when expectations and opinions are set about you,” she said.

As far as the exhibit, “if I have to sum up the exhibit, it’s very IFKYK,” Khan said. “His designs and his personal attitude are very much reflected in these installations, whether it’s a personal FaceTime or the exhibit openers, Tommy Ton’s photo from the 2009 Paris Fashion Week street style of the dapper O.G. Ye crew, well before street style was even a thing.”

Post-gala, Abloh and crew took the party to The Hoxton in the West Loop, where Abloh took to the DJ booth to spin Kanye West songs in honor of Ye’s birthday. The spot is near the temporary “residency” for Louis Vuitton, the pop-up store painted bright orange, the signature color of the “Figures of Speech” exhibition.