The designer has created the costumes for “Le Palais de Cristal,” a ballet by George Balanchine first created in 1947, which is being reprised in May. 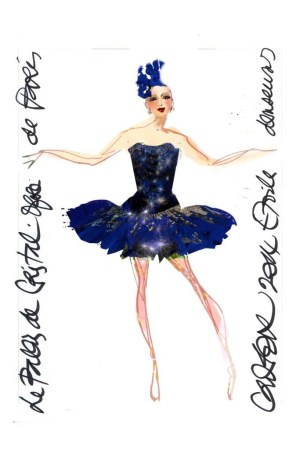 PAS DE DEUX: In the latest chapter in his ongoing relationship with the Paris National Opera, Christian Lacroix has designed the costumes for “Le Palais de Cristal,” a ballet by George Balanchine first created in 1947, which is being reprised in May. Following the four movements of the ballet, with each part featuring one specific color, the costumes are a take on classic ballet costumes with doublets for men and tutus for women done in embroidered velvet and tulle in monochromatic shades of red, green, midnight blue or champagne.

This is the fourth time Lacroix has designed costumes for the Ballet de l’Opera under his own name, though his first designs for the French institution actually date back to the late Eighties, when he created costumes under the aegis of now-defunct couture house Jean Patou.