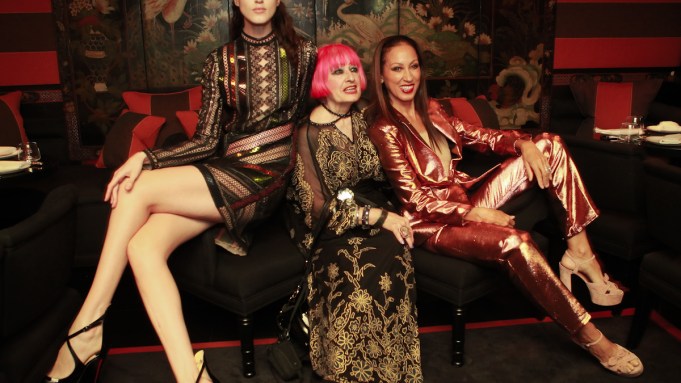 MY MUSE: Pat Cleveland celebrated the launch of her new book “Walking With the Muses: A Memoir” (Simon & Schuster) on Saturday night at the Blakes Hotel in Kensington, with guests including Donatella Versace, Winnie Harlow, Ellen von Unwerth, Philip Treacy and Clive Arrowsmith.

“The book is really a love story — it’s a daughter, that’s me, to my mother in the beginning, and it’s all about the pains of growing up and wondering what you’re going to do with your life,” Cleveland said. “Then somehow fashion comes into your life and it’s like you’re on a flying carpet.”

The party was held in the hotel’s new bar, with music by duo DJ Disco Smack, who also did the music at Kate Moss’ 40th birthday party. “I get distracted by the music,” Cleveland told WWD during the launch. “I just recently learned how to play the guitar so I hear music like words. I get so into it because I tear each word apart, when I first hear the music I explode into it.”

The American model grew up in Harlem in the Fifties and Sixties, and was first discovered in 1966 by Carrie Donovan, an assistant fashion editor at Vogue. She later moved to Paris, and became the house model for Karl Lagerfeld when he was creative director at Chloé. Not long ago, Tom Ford cast Cleveland, who is now in her 60s, for a sexy fashion shoot alongside Conrad Bromfield — a South African model in his early 20s — for Numéro Russia.

“Walking With the Muses” tracks Cleveland as a young girl hoping to become a fashion designer, and her path as she attains modeling success in the Sixties and Seventies, working with photographers such as Irving Penn, Richard Avedon and Steven Meisel. “I had built my life around fashion, the idea that these clothes will take me where I want to go. I used to make clothes and I thought this is my dream to be seen in those clothes,” Cleveland said.

“We’re so into the future, we are running ahead of ourselves but back [in the Fifties] we had the time to sit on our laurels, I guess,” said Cleveland, who also reminisced on being taught etiquette in her youth “We were taught to sit properly and always be a lady, but now we are bad girls and we are twerking and doing all these things!”