Sir Elton John attended the presentation - and ordered some bags. 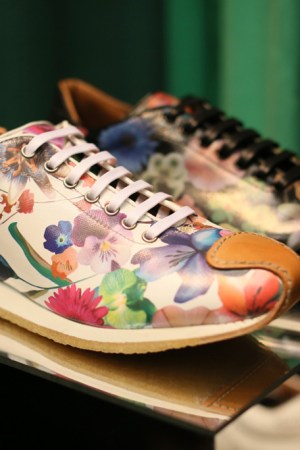 DOG DAYS: For the second outing of his Lathbridge label, Patrick Cox staged a presentation in Mayfair’s Sketch restaurant during London Collections: Men, with attendees including Sir Elton John, who ordered three bags in different colors.

Floral photo prints on Saffiano leather were everywhere – across John’s selections, plus sneakers, hightops and skater shoes – while other highlights included woven loafers and desert boots printed with a camouflage pattern and with camouflage soles to match.

There were sneaker/brogue hybrids, butterfly punched brogues and vaguely Seventies goat hide patchwork boots that had been vegetable tanned in Italy.

“I’m in a really happy place right now,” said the designer. “As my work is very autobiographical, what could be happier than florals, butterflies and disco balls?”

His only complaint was that his dogs Brutus and Caesar, the inspiration for his brand’s bulldog logo, weren’t allowed into Sketch. But maybe that was a good thing. “They’d be here eating off the plates if it was a French restaurant,” he said. “You can’t have everything.”