The artist’s take on the 19th-century German fairy tale Snow White is anything but happily-ever-after. 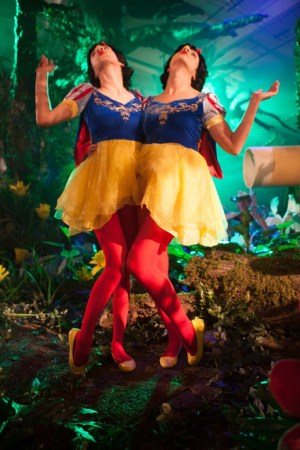 ONCE UPON A TIME: Upper East Siders and art aficionados will have plenty to talk about after experiencing Paul McCarthy’s WS installation at the Park Avenue Armory. The artist’s take on the 19th-century German fairy tale Snow White is anything but happily-ever-after. Aside from eight oversize screens projecting a video best described as dwarves-gone-wild, there is a 9,000-square-foot man-made forest with a house modeled after the California one McCarthy grew up in. Peeking through the structure’s windows, visitors will see that the interior is trashed with empty Champagne bottles, unmade beds and smeared walls. Those who give the somewhat disturbing videos more than a passing glance will figure out that the mess matches up with what she transpires on screen. Ticketholders must be 17 or older to walk through the dwarves-gone-wild scene, due to the explicit nature and risque content of the videos such as a naked “White Snow” character slapping an underwear-clad man called “Walt Paul” (played by McCarthy but resembling a better-known Walt.)

In addition to being McCarthy’s largest installation to date, WS is the first visual art project under the Armory’s new artistic director Alex Poots and curator Hans-Ulrich Obrist with an assist from Tom Eccles. The artist’s son Damon also had a hand in the installation which will evolve over time as a work in progress. Aby Rosen, Emma Bloomberg, Nancy Jarecki, Claire Milonas and Olivia and Adam Flatto were among the first VIPs to file through WS. Hauser & Wirth is behind three shows of McCarthy’s work including one with his son “Rebel Dabble Babble.”