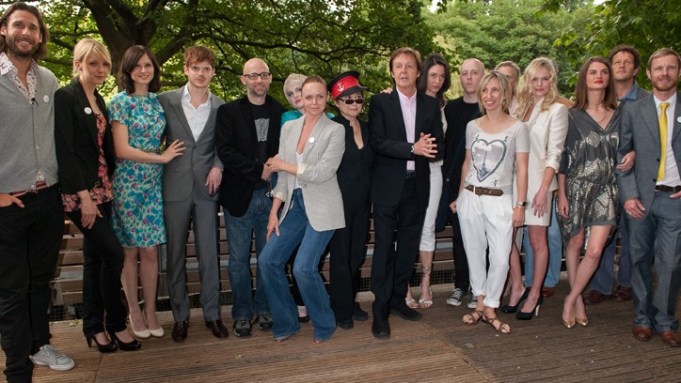 MEAT AND GREET: Sir Paul McCartney offered a recipe for vegetarian living in London Monday. The former Beatle and his designer daughter Stella hosted a luncheon at a restaurant in St. James’ Park, to support “Meat Free Monday,” their initiative to encourage Brits to down their steak knives in favor of vegetarian options at least one day a week. “America and Australia have also brought to light the damage [the meat industry] is causing to our planet, so even if you take one day a week to be a vegetarian then this will make a dramatic difference,” said the musician. “Our family has been like this for years — vegetarian, that is.” Yoko Ono, Kate Bosworth and Kelly Osbourne attended the green gathering and grazed on Linda McCartney mini sausages, burgers and a range of vibrant seasonal greens.

WEDDING BELLS?: Since reports surfaced that Marc Jacobs and his fiancé Lorenzo Martone planned to tie the knot in Provincetown, Mass., where Jacobs’ business partner Robert Duffy owns a seaside home, the little Cape Cod town has been awash in speculation. When will it happen? Have they come and gone in total secrecy? Will Madonna show up? One Provincetown caterer said he thought the ceremony took place this past weekend. A local airport employee said the couple wedded in neighboring Truro last Thursday in a ceremony attended by Sarah Jessica Parker and Cyndi Lauper. Locals were sure the reception went down at The Red Inn, a high-end restaurant close to Duffy’s house, last weekend.

All false, said a source close to the couple. Jacobs and Martone still plan to marry at the end of the Cape but are keeping the date quiet.

The town has become popular for weddings of same-sex couples since Massachusetts extended marriage rights to gays and lesbians five years ago, but it’s not every day a high-fashion designer ties the knot there. One potential hitch: the runway at Provincetown’s airport only accommodates prop planes and very small jets. Jacobs’ globe-trotting guests may have to travel to the Cape the old fashioned way: by boat.

HIGHER CAUSE: Donna Karan appealed to a gathering of 150 customers at Neiman Marcus in San Francisco last Wednesday to not be self-conscious about buying luxury apparel in a down economy, but rather think of the number of people along fashion’s economic chain being supported by their purchases. Behind each garment, “there is an amazing depth of knowledge and wisdom,” said Karan, sitting next to Neiman’s fashion director Ken Downing, as the duo offered commentary during a fashion show of the designer’s fall collection, followed by a trunk show. “They are purchasing [garments] for a much-larger cause,” Karan said, listing pattern and garment makers, dyers, models, hair dressers, photographers and retail employees among those whose livelihoods are tied to fashion.

TALENT SHOW: R. Kelly is making his first trip to Africa, and it’s all in the name of fashion. Kelly will perform at the Arise Africa Fashion Awards gala, which will close the first-ever Arise Africa Fashion Week taking place in Johannesburg. The awards, at the city’s Sandton Convention Center, are presented by Arise Africa Fashion Week and African Fashion International, and will be handed out in such categories as Designer of the Year, New Face of the Year, Lifetime Achievement, and Innovation. “I’ve dreamed about this for a long time and its finally here,” said Kelly, who on this trip will also perform in cities such as Cape Town, Sun City, Abuja and Lagos in Nigeria, said. “It will be one of the highlights of not only my career but my life,” he said. The fashion week, presented by Arise Magazine, features the works of over 50 designers from 20 countries. The winning designer will be given the opportunity to show their collection at the Arise Africa Rising show at New York Fashion Week this September.

NEW KIDS ON THE BLOCK: “London is a great petri dish for emerging talent,” said Sarah Mower on Monday, as she revealed the winners of the British Fashion Council’s New Generation sponsorship program for young designers at London’s Somerset House — the same venue that will host London Fashion Week in September. Designers Henry Holland of House of Holland, Mark Fast, Mary Katrantzou, Meadham Kirchhoff and Peter Pilotto have all been awarded sponsorship to put on a runway show for the spring 2010 season. Meanwhile, footwear designer Michael Lewis, who has previously designed shoes for Burberry and Louis Vuitton, is among those to win exhibition space sponsorship at London Fashion Week for the first time, along with Atalanta Weller, known for the pointy platforms she designed for Holland’s runway show. And Mary Homer, managing director of Topshop — one of the program’s sponsors — added the retailer is working with an as-yet-unnamed “influential image-maker,” to make a film celebrating the New Generation designers, to be released in September.

KEY MOMENT: Tiffany & Co. toasted its Keys collection Thursday night in Los Angeles with a cocktail party in a Chateau Marmont penthouse hosted by Kelly Wearstler, Lauren Santo Domingo and Frank Everett, director of the fine jewelry brand’s Beverly Hills store. Melissa George, Cameron Silver, Jordana Brewster, Phillip Bloch, Cristina Ehrlich and Lena Wald mingled among cases filled with Keys pieces, which Everett estimated he has sold hundreds and hundreds of in Beverly Hills. “It’s not the kind of thing you have to wait for a man to buy,” he said, noting the price range from $100 to $30,000. For Tiffany customers who prefer to sample goods before they buy, Tiffany vice president of public relations Linda Buckley mentioned the brand is spreading its fashion-focused concept store launched at the Americana at Brand in Glendale, Calif., last year to Seattle’s University Village later this summer. “There’s been a whole slew of naysayers, but jewelry is really meant to be mixed and matched and tried on,” she said.

STARS PEACE OUT: OmniPeace, the Los Angeles-based philanthropic apparel brand, held an event sponsored by Kitson on Thursday night at STK restaurant in Los Angeles to raise awareness of violence in The Democratic Republic of the Congo. Founder Mary Fanaro and co-hosts Jennifer Aniston, Courteney Cox and Sheryl Crow wore the signature logo Ts, of which a quarter of sales revenues go to UNICEF and the V-Day Foundation. “Fashion is a means of raising awareness and raising money. I wanted to get on board and try to shed a light on what’s going on in the Congo,” said Crow. “A lot of the stuff that’s going on there I didn’t have a clue about,” said Aniston. “I think people sometimes feel embarrassed because they don’t know, but it doesn’t matter when you learn about it — just learn.” Other guests included Demi Moore, Nicole Richie, Marisa Tomei, Kelly Lynch, Lauren Hutton and James Marsden.

PUTTING FOR DOLLARS: Industry executives and supporters teed up at the Quaker Ridge Golf Course in Scarsdale, N.Y., for the annual Fashion Institute of Technology Golf Classic earlier this month to benefit the school’s the Educational Development Fund. The event raised $216,400 with 87 golfers including Haresh Tharani, John Pomerantz, Terry Lundgren, Ken Natori, Roger Farah and Larry Leeds. The funds raised help FIT address a variety of needs, such as scholarships, financial aid and student services.

LOOKING LIKE DORIS: Fans of Doris Duke’s iconic style may want to plan a trip to Newport later this month. Ophelia’s Wardrobe, a vintage sale to benefit the Child & Family Ophelia Programs, will be staged June 19 to 21 in the Rhode Island resort town. This year’s edition will feature many looks from Duke’s personal wardrobe, including a black Sixties Chanel blazer, a Seventies Yves Saint Laurent maroon-and-gold-striped blouse and brass-studded denim pant and a Valentino couture skirt and blouse from the Seventies. “In addition to Ms. Duke’s outfits, we have assembled an unbelievable collection of unique vintage and designer clothing, hats, handbags, shoes and accessories,” said Mary Ambrogi, Ophelia’s Wardrobe’s committee chair.