Creative director Alithia Spuri-Zampetti is making her design debut for the label with a capsule collection. 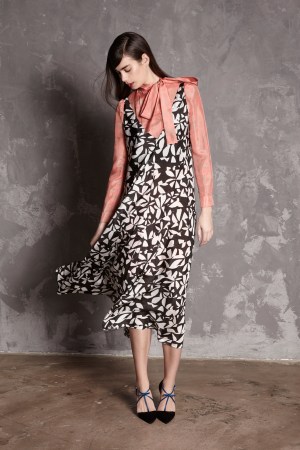 PARIS — Paule Ka has linked with luxury e-tailer Moda Operandi to showcase the first designs from its new creative director Alithia Spuri-Zampetti as it seeks to expand its foothold in North America.

Formerly the head designer in charge of women’s ready-to-wear collections at Lanvin, the 31-year-old was appointed in June with the mission of reviving the French contemporary fashion brand, which had been without a designer since the departure 18 months ago of founder and creative director Serge Cajfinger.

Ahead of her official debut at Paris Fashion Week in March, the Italian-American designer has produced a capsule collection available for pre-order from Moda Operandi for 15 days beginning today. Items from the trunk show are expected to be delivered from mid-March.

The line will go on sale in Paule Ka boutiques and selected stores in April.

The 53-piece collection, in a palette ranging from black and white to gemstone shades including ruby, topaz and cobalt, revolves around signature house codes such as the bow, Sixties influences and graphic details.

Spuri-Zampetti has given the bow a fresh spin by featuring it as a tie or a fabric inset, or as an accent on accessories. Meanwhile, an abstract floral motif features on fabrics ranging from crepe to poplin, silk and brocade.

“Moda Operandi is a major e-commerce player in the United States and works with prestigious houses,” Vautrin told WWD. “It’s a great opportunity for us to grow in the American market, which will be one of our key markets in 2016.”

The brand is already popular with celebrities including Meryl Streep, Lea Michele and Anne Hathaway. Spuri-Zampetti, a Central Saint Martins alum who has also logged stints at Valentino and Bottega Veneta, has been charged with expanding its offer beyond occasion dresses.

Paule Ka is present in 56 countries via 350 points of sale, including 60 monobrand doors. Its turnover is close to 50 million euros, or $54.3 million at current exchange.