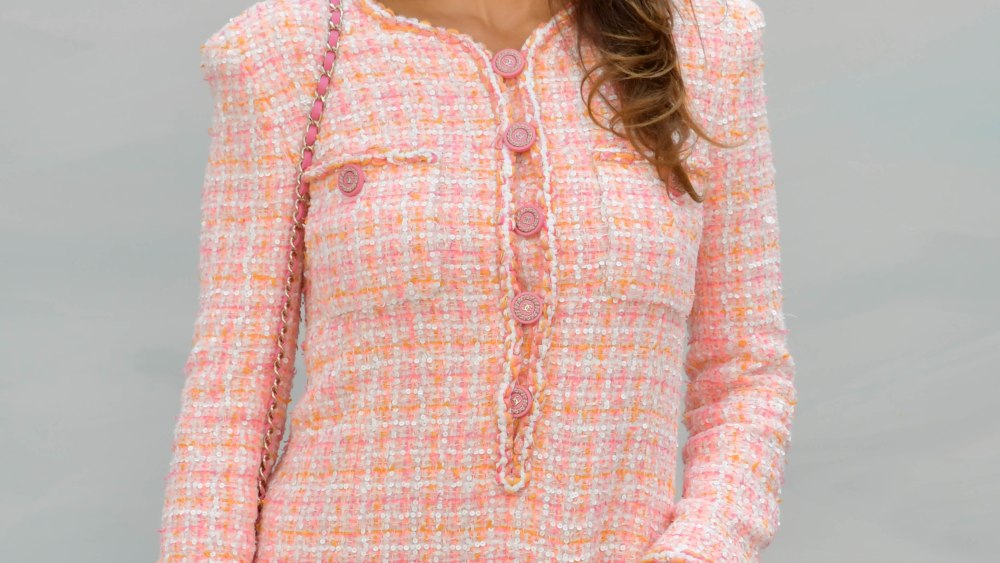 SOME LIKE IT HOT: Spanish star Penélope Cruz turned her show invitation into a fan at Chanel’s haute couture show on Tuesday, her first as a brand ambassador for the house. (The news was revealed that morning.)

Held in the Grand Palais, the set recreated the banks of the Seine, including the Bouquinistes, the term for the open-air bookseller stands dotted along the walls. They were manned by Brad Kroenig and his sons, Jameson and Hudson, Karl Lagerfeld’s godson who, like his father, is a regular on the Chanel runways.

All that was missing was a breeze.

“It’s like a terrarium,” said Ellie Bamber, who had wrapped filming “Les Mis” the day before. (The six-part drama adaptation of Victor Hugo’s 19th-century classic also stars Dominic West and Lily Collins, with Bamber in the role of Cosette.)

“It was really challenging, it’s been amazing creating Cosette’s journey. I feel like there are so many new things that an audience is going to see that, if they’ve watched the musical, they might not know about,” she said. “The book is 1,500 pages long, Victor Hugo goes into so much detail, and [screenwriter] Andrew Davies has captured that so well.”

Coming “from that to this was just beautiful,” she continued, adding: “I sat in my room and had French onion soup last night — it’s something I do every time I come to Paris.”

Also taking in the show were “Black-ish” star Tracee Ellis Ross, French ballet dancer Dorothée Gilbert, Stella Tennant and Caroline de Maigret who, despite being a true Parisian, was equally as enchanted by the set. “I’m a tourist in my own city. One thing I always like to do is walk along the Seine, to catch the wind…. It resources me; the light is amazing. It’s actually real, we do have our clichés,” she said.

A bright-eyed Mackenzie Foy said watching the show “felt like sitting on a park bench watching everyone go by.”

The young actress said observing Academy Award-winning costume designer Jenny Beavan at work on her latest movie, Disney’s live-action “The Nutcracker and the Four Realms,” initiated her into the art of clothesmaking.

“It’s based on the book by Ernst Theodor Amadeus Hoffmann, but it does draw inspiration from the ballet, and costumes play a big part. Seeing the process of clothes being made, I have a better understanding of fashion,” she said.

Pharrell Williams spoke for the first time about a Broadway musical he’s working on with Kenya Barris themed around Juneteenth, an American holiday commemorating the day on which slavery was officially abolished in the U.S.: June 19, 1865.

Though most states now officially recognize Juneteenth, it is still not an official national holiday, he explained.

“It’s a holiday that’s long overdue; it’s something that should be recognized. We just have a bad habit in my country of not really recognizing significant moments in history that deal with African-Americans and African diaspora, and we just want to tell that story,” he said, adding: “We’re working very hard on [the musical] already.”

The music producer is also working on a musical film titled “Atlantis,” based on the neighborhood where he grew up. “It’s not based on my life; it takes place in 1976. I was three years old at that time,” Williams said. “It’s just about the energy and the resilience and the majestic side of housing projects. When you’re young, you don’t really know the difference. All you know is it just feels magical, especially when there’s so much music around.”

Meanwhile, Cruz, backstage after the show, shared some words about when she first started getting into fashion.

“I’ve been a fan of fashion since I was 12 or 13. I’d get all the fashion magazines from my mum and would study them from beginning to end,” she said, recalling Lagerfeld’s start at Chanel in 1983. “I remember the fascination from the beginning….It is so interesting to see what they have created; they’ve created a fantasy that has very solid roots because he’s a genius,” said Cruz, pointing to the designer, who was greeting guests nearby.

“It’s not just the image and the fantasy; you look at every single thing he creates, he’s a true artist. There are only a few of them, on that level of creativity, and always reinventing themselves. I have so much admiration for him,” said the actress, who for her next film role will be playing Pedro Almodóvar’s mother when he was a child. “So it’s a pretty cool and interesting week for me,” added Cruz, wafting her invitation to try and stir up some air. “Going from Karl to Pedro back-to-back, it’s kind of amazing.”