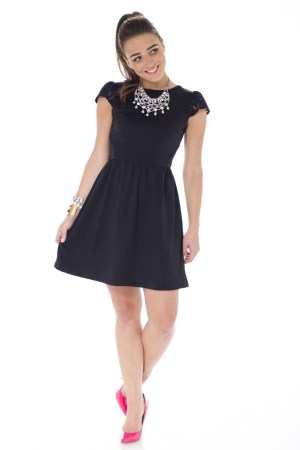 This Luxurious AC/DC Tribute Line Has a Chanel Connection

MILLER TIME: It’s hard to believe that fashion blogger Shauna Miller could have come up with a more incongruous subject if she tried: a Web site about Wal-Mart and fashion, two words that aren’t often paired together in the same sentence. But, for fashion blogger Miller, it was the start of an idea that’s blossomed into a multifaceted business. The 26-year-old blogger, whose site is called PennyChic.com, aims to style apparel from mass behemoth Wal-Mart, as well as Target, Kmart and Sears, into chic, trendy or edgy outfits. “No matter how little you spend on your wardrobe, you can still manage to look good,” said Miller, whose tag line for the blog is, “Putting Cheap on a Chic Pedestal.” “It’s about giving people the tools to find style and feel good about getting dressed.”

“Our original intention was to be a fashion-forward voice that could prove that you can be on the cutting edge of fashion within that [Wal-Mart] retail space,” Miller said. Then, Miller came up with an idea for an apparel collection for Wal-Mart, the retailer “that no one in the blogging world would touch. By embracing what is the largest retailer in the world and speaking to the largest demographic in the country, in just two years, I was able to pull [the collection] off,” she said.

When Miller attended Wal-Mart’s 2012 annual shareholders meeting in Bentonville, Ark., at the behest of public relations executive David Tovar, she learned more about the retailer. “They said [fashion is] not our meat and potatoes, we’re T-shirts and socks,” Miller said. “That’s true for brick and mortar, but Wal-Mart.com has a very forward-thinking team.” Wal-Mart’s e-commerce site will test the collection —  five LBDs with silhouettes such as a sheath and wrap dress — with 6,000 pieces online first. “We pitched it to Wal-Mart.com,” Miller said. “They said, ‘Sign me up.’ I’m also doing a plus size collection. We’ll see how it does and if it’s something they want to do in stores afterwards.”

The collection, called Penny Chic by Shauna Miller, was manufactured by California-based Aqua Blues. “I designed it,” Miller said proudly, of the collection, which will be available in mid-February. “It’s very important to me that the fit is tailored right and that the dresses are machine washable. The dresses look like something you’d see in a high-end boutique. They look like $150 dresses.”

The multitasking Miller is also writing a book for Little Brown that will be published in the fall.