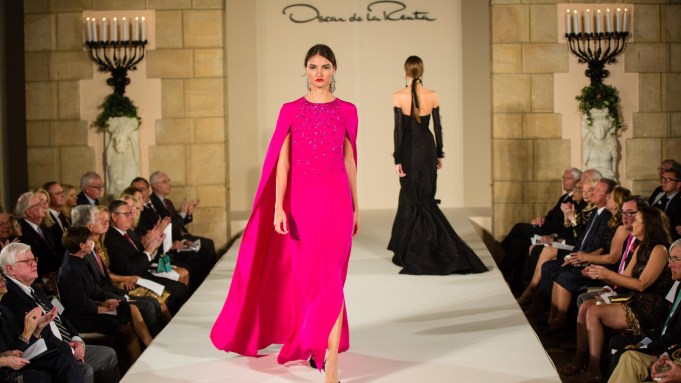 Peter Copping’s weekend in Palm Beach was also the Oscar de la Renta creative director’s maiden voyage to Florida. In succeeding his predecessor, he took on the house’s longtime charities, too, including the Hospice Foundation of Palm Beach. Last year, he skipped its annual Hospice Evening gala because he was too consumed with his debut collection. But he made up for it this time with a runway show of the spring collection, presented by Saks Fifth Avenue at the Flagler Museum on Friday, followed by an appearance and three-day trunk show at the retailer’s Worth Avenue store. The gala sold out, with 250 people buying tickets at $750 or $450 (for the under 45-year-old set).

“I’m really happy to be able to come down, finally, since Palm Beach is such an important market for us,” said Copping, who enjoyed the tropical locale. “Driving on the avenues lined with palm trees felt a bit like Beverly Hills at first, but it’s really quite its own thing. Florida is different from anywhere else in the U.S.”

He made the most of his limited time in meeting a good cross-section of his clientele and listening to their climate-based needs, such as more cotton, less silk. He noted the abundance of printed dresses in the crowd and received a strong reaction to shirtdresses, a red and bottle green eyelet lace group, and a cap-sleeved evening gown in midnight blue tulle, lace and silk organza with red floral embroidery.

“It was about the third piece out, a black lace top and knit skirt, when the applause started,” he said. “There’s a good potential for knits here.”

In the brief moment he had to himself, Copping wandered Worth Avenue’s vias. Miami’s vintage stores, which are on his to-do list, would have to wait for another visit. After a dinner hosted by Pauline Pitt at her home on the island, he headed straight to his New York studio on Sunday. The short flight appeased him somewhat in that he could return soon and more often, though not too much as to bore his fans.

“I wish I could stay longer, but there’s a full show to do,” he said, with New York Fashion Week looming. “There’s no rest for the wicked.”