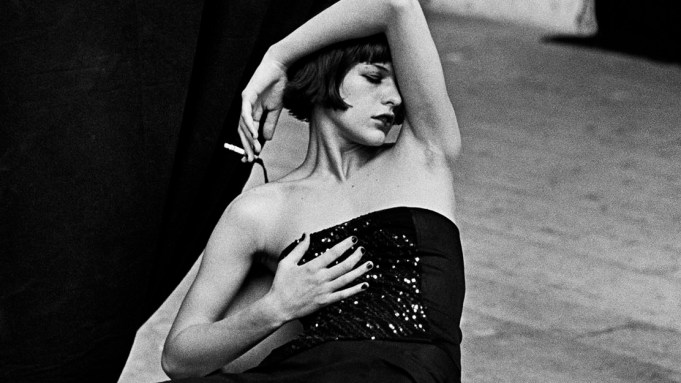 Berlin State of Mind: In Louis Vuitton’s latest Fashion Eye series of city-centric photo books by fashion photographers, Peter Lindbergh’s Berlin volume takes you there. Even when he wasn’t. The primarily  black and white book, encompassing 57 images shot between 1989 and 2010, includes photographs lensed elsewhere, such as Paris portraits of Milla Jovovich or Sabisha Friedberg and Jessica Stamm, or New York shots of  Stephanie Seymour, all looking like the epitome of a Twenties Berlin flapper or dark cabaret star.

“Berlin is an inspiration for me, more than a city,” Lindbergh told WWD Monday night at the Berlin Fashion Eye book launch and signing at the Louis Vuitton flagship here. “I said I have so many photos of Berlin, but the inspiration was more important. I mean Milla (Jovovich) is simply Berlin!” As he commented to the booking buying crowd as the signing officially got underway, the book encompasses “everything that for me is Berlin.”

Much of that is seen through an atmospheric haze in black, white and far more than 50 shades of gray that calls to mind the expressionistic films of F.W. Murnau or menacing sharpness of Fritz Lang’s “M.” Others seem to have been generated by a time machine, a somewhat shabby Kreuzberg pub shrieking prewar though it was taken simply months before the fall of the wall in 1989, and indeed mystery and a certain decrepitude are constants  in Lindbergh’s vision of Berlin. “Driving through town tonight, I thought no city is so put upon and used as Berlin,” he remarked with pleasure.

His links to Berlin go back to 1964, when the 18-year-old Lindbergh arrived there from the West German sticks to avoid the draft and study art. He switched gears when he realized the Academy was going to force him to draw from nature for two years, and instead hitchhiked to Arles, hoping to personally experience the light of his hero, Van Gogh.

He didn’t return to Berlin again until 1989, shortly before the Wall fell, to shoot a series for Comme des Garçon’s Magazine 6, including the photo of Shell House, which graces the back cover of the Berlin Fashion Eye, or the abstract contents of a postcard stand featured within. The building housing his friend Wim Wenders’ office is also in the book. “I had been there, and when I left and then turned around, the sun was right in his window. It was a beautiful moment,” Lindbergh reminisced. Or leafing through the volume, he stopped at a spread of fir trees and train tracks where “the trains went to the concentration camp. Nature has taken over, which is so much nicer than building some memorial,” he stated.

Lindbergh is double-booked, so to speak. His next tome “Peter Lindbergh. Shadows on the Wall,” published by Taschen in English, French and German, is just now being shipped. The 292 page book is derived from some 37,000 unreleased photos from Lindbergh’s 2017 Pirelli calendar shoot, and thus continues the groundbreaking nature of that project. For just as Lindbergh broke the two calendars per photographer rule with this third, which in turn took a dramatic turn away from the touched-up beauties in bikinis format, another cardinal Pirelli rule till now has banned the use of calendar shoot material for any other purpose.

When conceiving that shoot, Lindbergh recalled, “I said you know Marco (Tronchetti Provera, Pirelli ceo), something has to happen. It was just at the moment when the Chinese had bought into (Pirelli), and the Chinese don’t like bikinis and high heels. I said you have to make a statement, about how rotten the image of women has become. I means it’s awful and there’s no reason for it.” Casting 14 actresses  he said he “knew the best and admired the most” he captured Nicole Kidman, Julianne Moore, Alicia Vikander, Charlotte Rampling, Dame Helen Mirren, Jessica Chastain, Kate Winslet, Léa Seydoux, Lupita Nyong’o, Penélope Cruz, Robin Wright, Rooney Mara, Uma Thurman and Zhang Ziyi in all their real-life, no-makeup beauty. And the response was overwhelming.

“And so I called Marco again, and said the message is fine in the calendar, but image-wise, there’s just a tiny bit out there.” He got the go-ahead. “It’s the same women,” he commented. And the same unmistakable Lindbergh touch.