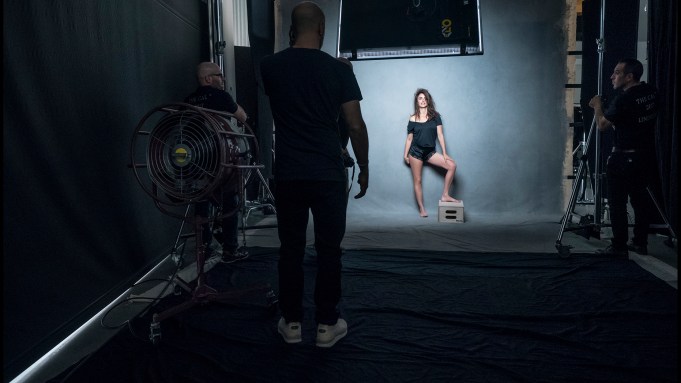 Things have changed since Peter Lindbergh first shot the Pirelli calendar in 1996 and in 2002.

For one, the limited-edition calendar, which is released every year by the Italian tire company, has veered further and further away from its earlier premise — nude models in high heels — and changed its rule that prevented photographers from shooting for the calendar more than twice.

According to Lindbergh, these were both changes that convinced him to shoot the calendar for a third time.

“For the calendar I shot in 2002, I photographed naked models and I thought it was really boring,” he said. “Talent is more important than nice body parts.”

For the 2017 edition, which will be released in November, Pirelli has also introduced a digital platform for the project — Lindbergh shot 15 actresses including Nicole Kidman, Uma Thurman, Alicia Vikander and Lupita Nyong’o. Lindbergh, who is known for his cinematic shooting style, said he wanted to portray his subjects through a more natural lens that he says goes against media’s current obsession with retouching.

“The idea of beauty today is a bloody mess. It’s really awful,” he said. “You look in the fashion magazines and see all of these retouched people. Some guys called retouchers go on the computer and take away everything that you are and then call it photography. I think it’s such an insult.”

Lindbergh shot the actresses over the course of four weeks in Berlin, London, Los Angeles and Le Touquet, a region in northern France. The calendar will also feature Anastasia Ignatova, who teaches political theory at Moscow State University. Lindbergh met her in 2015.

“I hold my breath when I see the images and not because I took the pictures, but because it really happened. The idea of the calendar is to show what real beauty comes from and not what people impose on you to believe is beautiful.”

Along with retouching, Lindbergh is also annoyed with how people use Instagram, although he got on the platform last year.

“I initially hated the idea of it but I eventually joined,” he said. “As long as you don’t use Instagram to say, ‘Oh, hi, I had lunch with Brad Pitt,’ I think it’s fine. But people buy followers now. That’s horrible. I don’t care about that, but when people book girls today they look at their follower count. It’s all about influence and economics now and that has already killed a lot of other things.”