Ermenegildo Zegna feted its new Tokyo flagship... Valentino will be the 13th recipient... Forever 21 will open its first store in Japan... 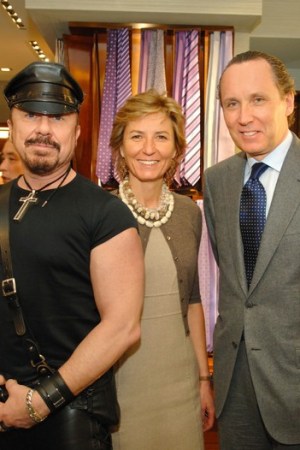 MARINO MOMENT: Ermenegildo Zegna feted its new Tokyo flagship Thursday evening, attracting the likes of Peter Marino, who designed the store, as well as Japanese conductor Yutaka Sado and a male model clad in a kimono made of Zegna fabrics. Marino has a long roster of upcoming projects including upcoming Zegna Global Stores in Hong Kong and Shanghai, Louis Vuitton flagships in London and Rome, and Chanel’s first freestanding beauty store in Tokyo. Of the latter, he deferred talk on the specifics but made his enthusiasm known loud and clear. “I’m getting paid very nicely and I’m very happy to be doing it,” he said, letting out a hearty belly laugh. More chuckles came later, when Marino and Anna Zegna mused on the Japanese preoccupation with business cards. “I ran out around 11 this morning,” he said. “They probably collect them like baseball cards.” Meanwhile, Gildo Zegna pondered the tough retail climate but kept up a brave face: “You have to keep a positive mind. The good thing is that you have lows in America and [Japan] but you have highs in China. God bless China!”

VAL’S WALK-ON: Valentino will be the 13th recipient of the Rodeo Drive Walk of Style award. The induction ceremony will take place on the famed Beverly Hills street April 2, complete with an outdoor exhibition themed in the designer’s signature red. The ceremony date was chosen to coincide with the West Coast premiere of the Matt Tyrnauer documentary “Valentino: The Last Emperor.” Since retiring in 2007, the designer has kept up his globetrotting pace, and most recently visited Los Angeles during Oscar Week, where he attended the Academy Awards ceremony.

BIG PLANS: Forever 21 will open its first store in Japan next month but that Harajuku flagship is just the beginning of the brand’s designs on the island nation. The California-based fast-fashion brand plans to open 50 stores in Japan over the next few years, according to Jane Ha, Forever 21’s director of stores. Ha was in Tokyo last week to prepare for the big opening and do some research on the neighborhood the brand will call home. She struck pay dirt: At one point, she popped into next door neighbor and rival Hennes & Mauritz and inadvertently walked in on an in-store trend meeting of executives. “They were just very open about having that discussion [during] the business hours so I was able to listen in,” she said.

GUR DEPARTS OSSIE CLARK: Avsh Alom Gur has left his post as creative director of Ossie Clark, the label that was relaunched by investor Mark Worth in February 2008. The decision was by mutual consent, according to industry sources. Worth, who has an exclusive licensing deal with Alfred Radley, the clothing manufacturer who purchased Clark’s business in 1968, is looking for a replacement, while Gur will refocus his attention on his signature collection. Neither Worth nor Gur could be reached for comment at press time. Gur’s colorful, print-filled collections for Ossie Clark received mixed reviews over the past three seasons. His last collection for the label is for fall.

LET THE PAINT FLY: Yves Saint Laurent’s art works are once again courting controversy. Andy Warhol’s painting of the late couturier, which had been hanging in “The Great World of Andy Warhol” exhibition, which opens at the Grand Palais next week, has been removed at the request of Saint Laurent’s partner, Pierre Bergé. Bergé objected to the painting being displayed in the “Glamour” category alongside portraits of Helene Rochas and Sonia Rykiel and requested its removal. French daily Le Monde on Friday reported that Bergé told exhibition organizers: “You can’t mix chalk and cheese.” The four-panel painting, made from a series of Polaroids and completed in 1972, was one of the only works not put up for sale in the record-breaking YSL art auction last month. “We are really sorry not to be able to show the portrait of Yves Saint Laurent,” said a spokeswoman for the Grand Palais on Friday. “This exhibition represents three years of work.” Bergé couldn’t be reached for comment.