The duo was joined by friends at Moda Operandi to celebrate the launch of their debut Atelier Swarovski collection. 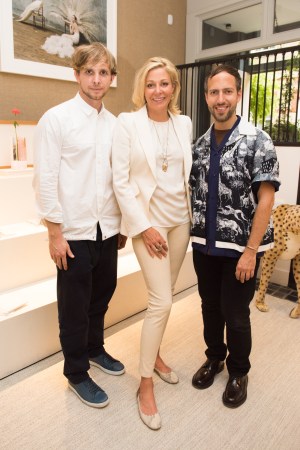 LONDON — Peter Pilotto and Christopher de Vos were joined by friends at the Moda Operandi showroom in London to mark the launch of their debut Atelier Swarovski by Peter Pilotto jewelry collection.

Eyeing up the baubles was composer and pianist Rosey Chan, who was wearing a shoulder-baring jumpsuit by Peter Pilotto. “People ask me all the time if I find it difficult to play [the piano] wearing rings but actually it’s bangles and bracelets that are the problem,” she said. “If I’m playing a piece and getting a bit dramatic, they can sometimes bang the piano and make a noise that the audience can hear.”

The collection, of which some pieces are available on Moda Operandi now with the majority arriving in select Swarovski stores and online from September, first appeared on the duo’s fall runway last February. It was inspired by the wintry northern landscapes that informed their ready-to-wear outing, and makes use of their accomplished use of color and geometric patterns.

De Vos said they had tried to create a graphic representation of a tree’s branch for the collection, called “Arbol” (Spanish for tree). The collection is comprised of rings, bangles, necklaces, chokers, earrings and statement hairpieces, which had started life as necklaces sewn into the models’ hair for the runway then were developed into the hair accessories.

Following the launch, De Vos and Pilotto were planning on taking some time off. “We have plans to go trekking to Norway this summer for a week,” De Vos told WWD. “We always go on an adventure. We’ve been to a lot of crazy places but this time I think we are going to take it a bit slower. We could never spend two weeks lying by the beach; I think because Peter and I are quite good in movement so we keep it on the move.”