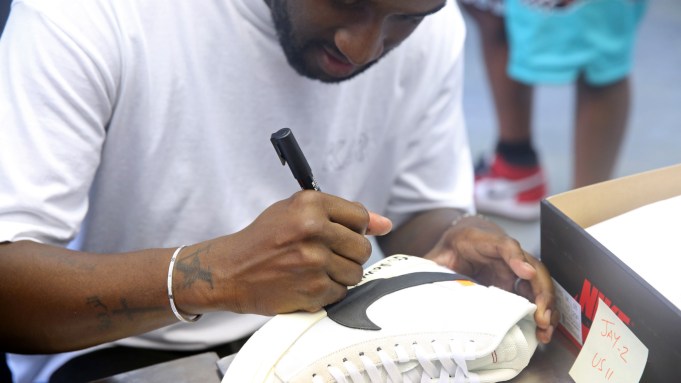 STATE OF THE ART: Not content with showing his men’s collection at Pitti this season, Virgil Abloh is showcasing the outfits in a gallery space in the north of Paris for the duration of the men’s shows in the French capital.

SEE ALSO: Virgil Abloh to Take ‘Temperature’ of Our Times at Pitti >>

“It’s dope,” Union said. “I love the location, you know, kind of taking it back to the people, which is great. It says a lot about his commitment to urban areas and bringing art and life to all areas of the world, not just the super chi-chi areas, so I love that part.”

Wade said he enjoyed catching up with a fellow Chicagoan. “To see his rise and success is just remarkable,” he said. “We go to so many fashion shows, so to be able to come here and have that time to kind of get into the psyche of why the stuff was created, you can appreciate it more that way than to just to sit and see clothes go by.”

Curated by Piotr Niepsuj, the show marks the debut of EMP TY Gallery, a new conceptual platform for art. The temporary Paris location in the 18th arrondissement will host a flash sale of limited quantities of several shoe styles from the spring collection on June 24 between 6 and 8 p.m.

“This is Raf Simons’ old showroom — did you know that?” Abloh remarked. “This is a space that’s steeped in youth generation.”

The designer collaborated with artist Jenny Holzer on the collection, with the aim of addressing global political upheaval and weighty issues like the refugee crisis in Europe. The space is designed to welcome some of the young fans who habitually throng to his shows in Paris.

“If some kid from Kansas lands into Paris and is like, ‘Damn, I missed the fashion show,’ he can still see it, come at his own pace, get a poster, get the pamphlet, read more if he wants to — or at least see Off-White up close and personal,” Abloh said.

He also quietly signed some sneakers from his upcoming collaboration with Nike for a handful of famous friends, though he remained mum on when the shoes will officially drop.

Abloh, who has previously stated his desire to take over a storied fashion house, appeared to have changed his mind since Givenchy officially denied rumors earlier this year that he had been approached to succeed Riccardo Tisci at the label.

“Who knows? I’m open to the idea, but I’m more interested in using my brand to show where fashion houses are missing the mark,” he said. “I’m doing a collaboration with Ikea, with Nike, with who knows. It’s still Off-White. It’s like I’m using a different supplier to make an idea that I love.”

Balenciaga Bike Goes on Sale at Colette: The logo bike retails for 3,500 euros.

Demna Gvasalia Takes Cool Dad Concept to the Next Level: Demna Gvasalia’s Balenciaga Spring 2018 collection was an ode to Sunday in the park with Dad.