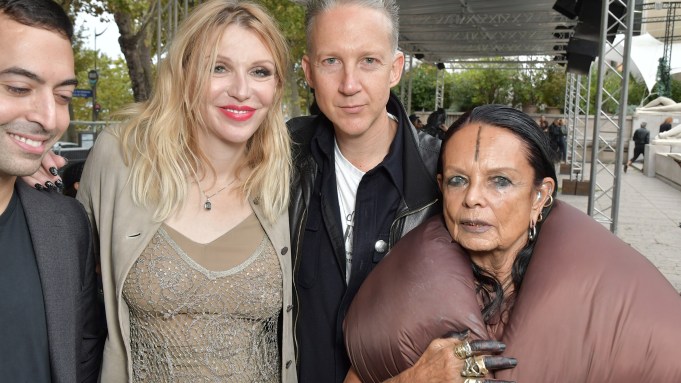 COME RAIN OR SHINE: Guests including Fergie and Courtney Love were invited to don a peculiar uniform at the Rick Owens show Thursday evening — on each seat of the outdoor location, around the fountains of the Palais de Tokyo, was a black raincoat, which staff were encouraging everyone to wear.

Wise advice indeed, as the central water feature showered the runway — and the front-row attendees — with a steady drizzle as the show progressed.

Ahead of the show, Fergie enthusiastically embraced friend Carine Roitfeld, with whom she worked on looks for her album’s videos.

She was in town promoting her new record, “Double Dutchess,” released last week, with an appearance set for French television Friday, and another in Berlin shortly after. “Then it’s back to Paris. I’m probably going to try to fly back Saturday night from Berlin in the middle of the night for Carine’s rave,” she said. “No sleep.”

Love, meanwhile, had had to leave daughter Frances Bean Cobain behind. Although they had hoped to attend together, “She got food poisoning,” she explained. They plan to hang out together in the City of Light until Saturday, she said.