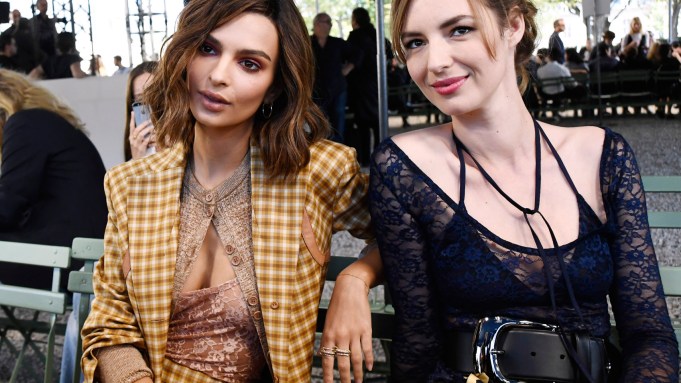 BUSY BEE: Emily Ratajkowski has a lot to keep her occupied over the next few weeks — her upcoming role, in art heist movie “Lying and Stealing” alongside Theo James, involves mastering both French and Italian, neither of which she speaks, she admitted at the Nina Ricci show Friday afternoon.

“I’ve been working with a dialogue coach,” she said. “Luckily I have a couple of weeks to prep when I get home. Wish me luck.”

Ratajkowski joined front-row guests including Vashtie Kola, Louise Bourgoin, Leaf Greener and Jeanne Damas at the show, hosted under a circus tent-like roof outside Les Invalides on what was turning into an unseasonably warm day.

Actress, writer and director Géraldine Nakache, another of the guests, had just finished writing her third movie, which she hopes to shoot next year. “It’s a project for Leïla Bekhti and myself,” she said, referring to her close friend, who also starred in her two previous films. “I only just finished it, so it’s too fresh to sum the storyline up; give me a week or two,” she added.