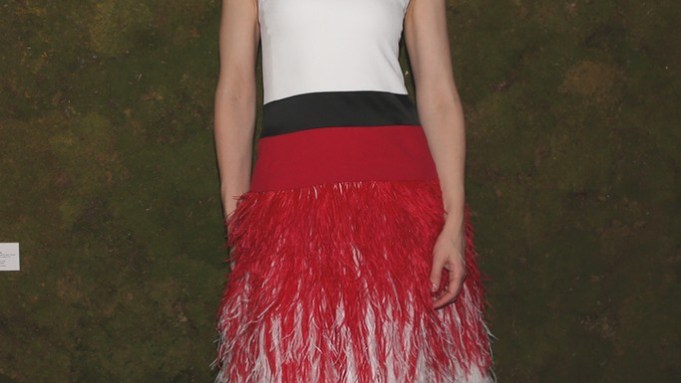 FACE VALUE: Actress and SKII model Cate Blanchett was among guests at P&G Prestige and Vogue Italia’s “Beauty in Wonderland” bash in Milan at the ornate Casa degli Atellani, and she was eager to set the record straight about her character in the Disney movie, “Cinderella,” she’s about to start filing. “Everyone’s saying it’s the ugly stepmother, and I say ‘Ugly doesn’t come into my contract. It’s the wicked stepmother!’” she laughed. “The sisters are ugly; the mother is wicked.”

Thanks to glorious weather, guests congregated in the garden, where mannequins in coats and hats were set amidst whimsical lamps and sofas. Fashion figures milling around included Gucci’s Frida Giannini, with Patrizio di Marco, Emilio Pucci’s Peter Dundas and Moncler’s Remo Ruffini. Sailing champion Alex Thomson and model Alex Lundqvist were among the P&G faces present, along with Dolce & Gabbana fragrance models Bianca Balti and David Gandy. Asked about his new venture as a contributor to Vogue, GQ and the Daily Telegraph, Gandy noted writing “is a challenge to me. It kind of takes me out of my comfort zone.…But it seems to be popular, so it’s good.”

Actress Blake Lively — the model for the Gucci Première fragrance campaign — said she was enjoying hanging out with Giannini in the fashion house’s atelier, and cited a major plus to spending time in Italy: “Pappardelle,” she offered. “I’m a big fan of Italian cooking.”