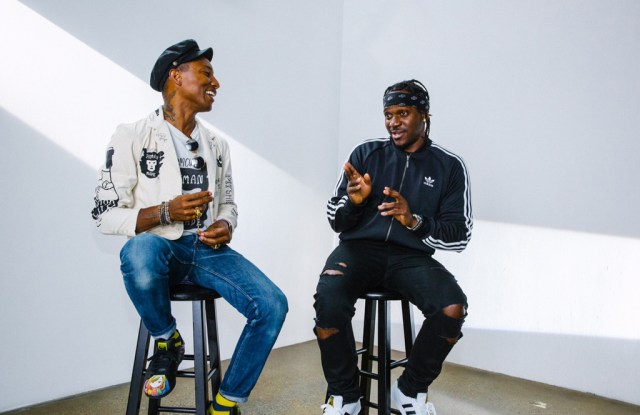 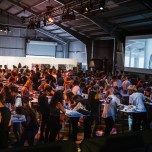 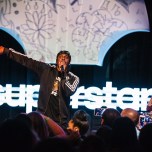 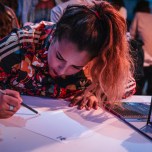 THE NEW SUPERSTARS: Rap music fired up more than 200 artists, athletes and students to get creative with Pharrell Williams and Adidas at Los Angeles’ Milk Studio on Saturday night.

Using the athletic company’s Original Superstar sneaker as a canvas, guests dug into a tote bag of tools provided by Adidas, which wanted to see how the Millennials would reinvent its signature shell toe detail. Each unique design was then digitally printed onto an actual pair of shoes and projected as the backdrop for a surprise performance by rapper Pusha T, one of the five influencers hand-picked by the multifaceted Williams.

“The goal was for Adidas to open up doors and provide a platform for young creative minds to, you know, bring their ideas into fruition and to see that it could be done,” said Williams, who enjoys an ongoing collaboration with Adidas that lets him show not only his artistic side but also his progressive views on society and culture.

“It’s just a way to be with the culture, with the kids and with the people,” Pusha T said. “We’re pushing creativity, and getting to see the youth.”

The event embodied Adidas’ fall campaign motif of creating for an audience of one, something exemplified by Williams’ quintet of influencers. Besides Pusha T, he also selected actor and director Grigoriy Dobrygin, graffiti artist Smithe, visual artist VJ Mian and jewelry designer Yoon because, he said, they are “people who have great intentions to match their great creativity.”

The campaign also gave Williams and Pusha T their first opportunity to work together outside of music. The duo will soon begin plugging Pusha T’s forthcoming album, titled “King Push.”

“Between us, it’s a lot of black ambition and desire for black excellence,” Williams said. “We’re talking, essentially, human excellence.”