“One plus one always equals three,” Pharrell Williams replied with a big grin when asked about the power of product collaborations. 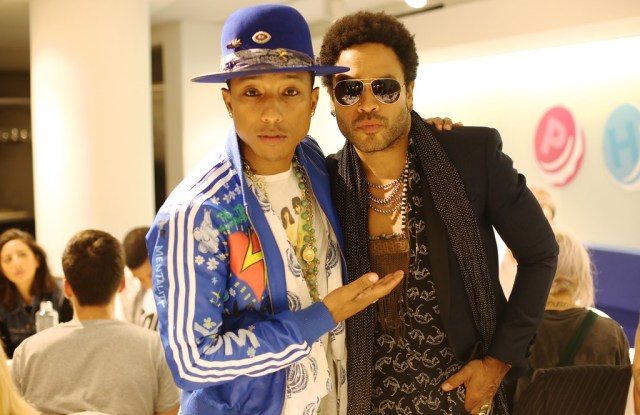 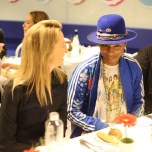 LUCKY STREAK: “One plus one always equals three,” Pharrell Williams replied with a big grin when asked about the power of product collaborations. In his case, however, the math gets a lot more complicated.

On Tuesday, Colette in Paris hosted a lunch for the music star to celebrate 14 Williams product tie-ups currently sold at the concept store, including an exclusive box of six macaroons he created for Ladureé, sold only during its “Pharrell Week,” coinciding with a four-night gig at Le Zenith.

Toting a leather satchel bearing a train motif, part of a leather goods range with Moynat, Williams wore a Peace Love World for Pharrell T-shirt and red Timberland Bee boots, all available at the store (although he customized his with slogans including “Don’t Same the World.”)

“We were discussing a denim fur,” Williams said during dessert as he had an impromptu tête-à-tête with the folks from G-Star Raw, with whom he created a line called Raw for the Oceans, made of a fiber made from discarded bottles. “Pulling plastic out of the sea,” the “Get Lucky” singer enthused.

Such collaborations, he said, “allow us to just be creative. That’s what a partnership should be about, along with learning something.”

“For each collaboration, he really proposes something new,” she said, mentioning forthcoming Adidas sneakers with inside soles dotted like an acupuncture chart.