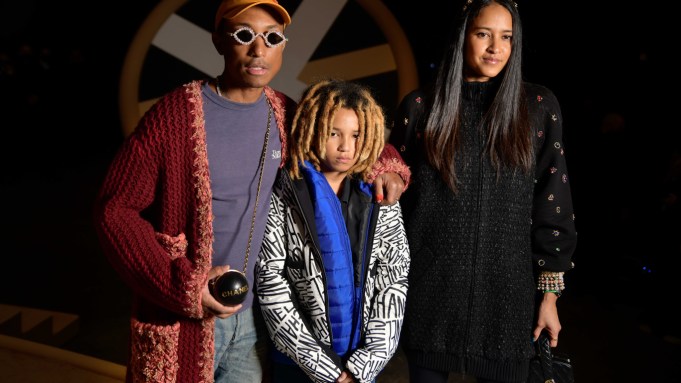 HORSEY SET: “We have to support creators at all costs. Everything in here was made by a creator…they were all once just thoughts, they were all just epiphanies,” said Pharrell Williams after a Chanel haute couture show that left him impressed by the set designed by contemporary artist Xavier Veilhan and the music by Sébastien Tellier.

“I mean, we are literally sitting on the guy’s ideas,” he said, taking his place on one of Veilhan’s seats shaped like a pommel horse and describing Tellier’s live performance on a verrophone, an instrument made of glass tubes and played with wet fingers, as “genius” for its “stellar, otherworldly” sound.

Along with Charlotte Casiraghi opening the show on horseback, it was the kind of experience that Belgian singer Angèle was hoping to share with her mother, who accompanied her to the second runway show. “It was her birthday last week and I wanted to share…this world I’m starting to be comfortable with. Bringing her here makes it ultra-real and reminds me to cherish this access to fashion and craftsmanship,” she said, revealing that she was here to work with Chanel artistic director Virginie Viard as part of the preparations for her upcoming tour starting in April.

Sitting on the sinuous rolls that served as benches were Sofia Coppola; emerging French-Romanian actress Anamaria Vartolomei, recently named among the Révélations des Césars; choreographer Blanca Li, and Vanessa Paradis, who described the setup as “impressive. We were all sitting quite low, so we saw that giant horse and the pretty Charlotte [Casiraghi] atop it.” The French actress and singer just finished starring in a four-month run of “Maman,” a play written by husband Samuel Benchetritt, and although her character had been intense, she would repeat the experience with pleasure.

The profusion of talent among friends of the house was just what Margot Robbie needed — especially now that she’s spending more time on her production company LuckyChap Entertainment, co-founded with husband Tom Ackerley and pal Josey McNamara.

“I’m really just [here] to try and incorporate the Chanel family with the producing work that we’re doing,” she joked, pointing out Margaret Qualley’s starring role in Netflix’s latest hit show “Maid,” and a new project featuring Kiera Knightley being filmed in Boston.

That was one of several things the actress and producer now had time for, since deactivating her social media accounts last summer. But “you always find something else to distract yourself and procrastinate,” she revealed. In her case, “my free time is always dictated by food but we actually went to the furniture markets,” she said, confessing she had her eye on vintage kitchen cabinets.

The conversation jumped from furniture to a Barbie Dreamhouse she owned as a child thanks to her next project, an upcoming live-action version of the famous doll’s adventures, starring the Oscar nominee in the title role.

“I’d go to like my cousin’s house to play with the dolls, but like that house. The way it folded, the just-slightly unrealistic dimensions, the furniture — it was so fun,” she said, regretting that she hadn’t kept it. “It was so satisfying,” she sighed.