The Tennis Hu is Williams' first signature shoe for Adidas.

By Jessica Iredale on May 3, 2017
View Slideshow 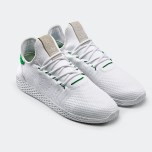 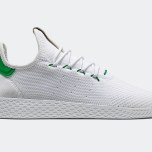 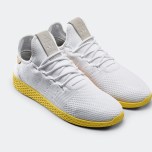 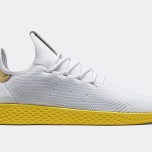 Tennis Hu Icons includes two styles, both with white, flexible Primeknit uppers and one with a green sole and green laces, the other with a yellow sole and yellow laces. The green one looks like an aerodynamic update of the Stan Smith. The yellow one nods to the Forest Hill. The retail price is $130 and the shoes will be available through Adidas retail stores, e-commerce and key wholesale accounts. The line will expand in color ways and new materials throughout the year.

“I always wanted to create something that has the capability to become instantly recognizable and timeless and I wanted to pay respect to the classic icons in order to do that,” said Williams. “I took inspiration from the details that make classics such as the Stan Smith and Forest Hill feel familiar and identifiable which led us to the colors — green, white, and yellow, hallmarks of the 1970s’ court classics. I  wanted to see how we could develop this notion of a modern classic further. We were inspired by the idea of a lightweight runner so we incorporated Primeknit, an EVA midsole and integrated lacing system. I wanted to strip it to the bare essentials, something different to anything I’ve ever done, that could be worn by everyone.”

The Tennis Hu’s are Williams’ first “signature” sneaker for Adidas Originals. For those who are not fanatical about Adidas Originals-Williams trivia, he’s been collaborating on footwear, apparel and accessories beginning in 2014 when he put his spin on the Stan Smith with the “Solid Pack.” Since then, Adidas and Williams launched more than a dozen collaborative projects, including the Hu collection last year. “Hu” is short for “human” and the collection is centered around the idea of bringing people together and celebrating cultural differences.

Hu launched the Williams version of the NMD sneaker and built into a colorful footwear and activewear collection featuring flags, stripes and translations of the words “Human Race” in English, French and Japanese. The Tennis Hu’s are the next phase of the Hu collection. As for being Williams’ first “signature” shoe, that means that it’s a completely new style and doesn’t take any physical elements from any previous Adidas silhouettes — which means the Stan Smith and Forest Hill references were just inspirational. In other words, Pharrell Williams could be the new Stan Smith of sneakers.

“For Originals, authenticity lies at the core of the brand and drives us to seek partners who share our cultural values,” said Torben Schumacher, general manager of Adidas Originals and Style. “Pharrell epitomizes what Adidas Originals is, he connects the brand to culture while connecting with our global audience. We’ve always embraced Pharrell’s vision in streetwear and fashion to be inclusive of everyone and to push the creative boundaries. We’re very excited to see how Adidas Originals [Equals] Pharrell Williams Hu, a concept that celebrates the diversity of humanity in all its glory, will continue to grow.”