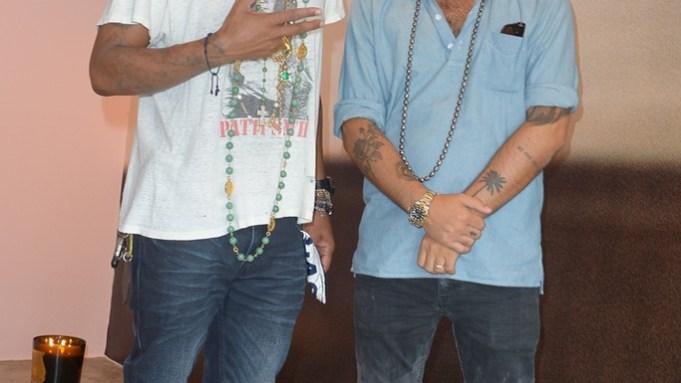 MOOD BOARD: Pharrell Williams — he of the ubiquitous riffs “Happy” and “Get Lucky” — joined Moncler artistic director Francesco Ragazzi at Milan’s Cardi Black Box gallery Saturday at an event hosted by GQ Italia. The duo signed copies of Ragazzi’s new book “Palm Angels,” a collection of photographs focused on skater style in Los Angeles, published by Rizzoli with a foreword by Williams.

Ragazzi said his interest in documenting the California skateboarding scene began in 2011 when he spontaneously snapped a young skater with long blond hair blowing across his face.

“It’s very much about the city of Los Angeles, and the energy that it emanates,” he said, adding: “There are people skating there that you don’t find anywhere else in the world, and I found it really captivating.”

Like Ragazzi, Williams, who performs tonight at the Mediolanum Forum, expressed fascination with the different atmospheres he experiences while traveling, and noted he had been to Italy “maybe a dozen times.”

“Each place kind of has its own energy, so the people sort of kind of carry on that energy,” he said, adding: “What makes the world so cool, is that we all have our individual things that we respond to, and that these environments sort of give us a vibe.”

In the forword to the book, Williams recalled getting his first skateboard at age 10 or 11 from “a surfer named Steve, who was a good friend of my dad” and that as a teenager, he “drew on every pair of Vans” he owned.

At the presentation, the singer said he wanted to support Ragazzi as an emerging artistic talent. “As much as I like fashion and as much as I appreciate skateboarding for giving me the lens that I still see life through to this day, I did it mostly for this guy,” he said.

Among those scoping out the gallery and snagging autographed books were Angela Missoni and Remo Ruffini.