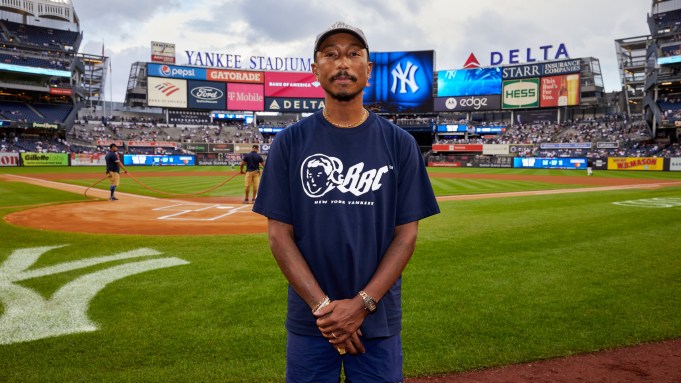 Pharrell Williams had the distinction of throwing out the first pitch at Yankee Stadium on Monday for game one of the New York Yankees and New York Mets “Subway Series” this week.

The Bronx Bombers pulled out a 4 to 2 victory over their New York City rivals hailing from Queens, but long before Yankees outfielder Aaron Judge hit his 47th home run this season in the third inning, Williams, joined by his son, Rocket, entered the annals of first-pitch history.

Before the game, Williams prepared for his ceremonial toss with Dominican pitcher Luis Severino to some of his tunes like “Feels,” his song with Calvin Harris, Katy Perry and Big Sean on Harris’ 2017 album “Funk Wav Bounces Vol. 1,” and took to the mound to hit song “Frontin’” with Jay-Z from 2003.

Williams has many reasons from this year alone to throw the first pitch at the game. One could be the return of his Something in the Water festival in Washington, D.C., during Juneteenth weekend this year or to promote his skin care line Humanrace’s entry into body care.

Or it could’ve been to celebrate his Nature’s Escape science and nature exhibition at the Something in the Water festival created by Stem, a pest control brand from SC Johnson and Williams’ educational organization Yellow. “They were one of the many brands to be involved,” Williams said about Stem and the exhibition. “The festival wasn’t just selling tickets but was about community.”

But the pitch was actually to celebrate the Yankees’ collaboration collection with streetwear label Billionaire Boys Club, one of Williams’ first ventures outside of music almost 20 years ago.

“George Steinbrenner reached out,” Pharrell said about the initial idea. “It started two-and-a-half years ago and to see it finally come into fruition is awesome. It’s two brands born in New York, one is obviously much older and has decades of heritage and then there’s Billionaire Boys Club, which is also approaching its second decade.”

Accessories include a co-branded coffee cup designed like a New York City disposable coffee cup, replacing the phrase “We are happy to serve you” and mini mugs with the Yankees logo on one side and the Billionaire Boys Club name and astronauts on another side; an astronaut toy with catcher’s glove; a duffel bag, and a helmet bucket.

“To get these two brands together is an honor for me,” Williams said. “I’m from Virginia, I didn’t think music would take me to doing so many things like making clothes.”

Williams mentioned his friend and frequent collaborator Jay-Z releasing his own cap and collection with the Yankees more than 10 years ago and how it “transcended the sport,” but what drew the producer and entrepreneur to the Yankees was the logo. He had a Yankees jacket by Starter that he put his spin on for this collection that has the phrase “Wealth Is of the Heart and Mind, Not the Pocket,” and the “V” hand sign from Pharrell’s music label Star Trak, the Yankees name and patch on the sleeve and an astronaut at bat on the back.

Will more collaborations be in the works? “We hope so,” said Williams, who admitted he doesn’t reveal too much about his projects until they will launch. “The Yankees are the world’s biggest sports franchise. Nothing is bigger or better. For me it’s such a blessing to participate and experience.”