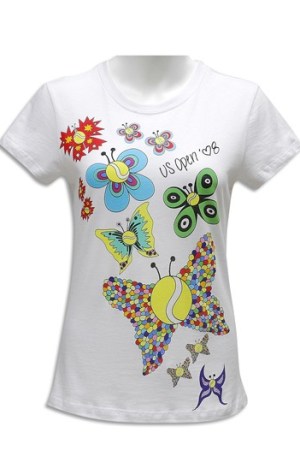 PHELPS PLUGS CHICO’S: Apparently, Michael Phelps’ Midas touch extends to his mother Debbie. Once Chico’s caught word she had stocked up on some of its clothes before jetting off to Beijing to watch the Olympic swimmer work his magic in the Water Cube, the retailer spread the word via e-mail. Chico’s Web site even showcases “The Debbie Phelps Collection,” an assortment of her travel pieces, including the ensemble she wore for a Johnson & Johnson commercial that debuted Sunday night during the closing ceremonies. Curiously, Chico’s does not have a formal agreement with her, but talks are under way with her management team about potential collaborations, a Chico’s spokeswoman said.

This story first appeared in the August 26, 2008 issue of WWD. Subscribe Today.

STILL LOVING VAL: Come New York Fashion Week, Valentino will be paid another homage with an exhibit, called “The Red Thread: The Inspiration and Passion of Valentino Garavani,” at the The Grace Building at 1114 Avenue of the Americas. What sets this apart from similar showcases on the retired designer, however, is the firm behind it, Samsung Electronics, making it one big tech-driven affair. “This is an opportunity for digital curation,” notes senior vice president and chief strategic marketing officer Steven Cook of the show’s five-room exhibition, the first in an ongoing Samsung Imagination Icon Series. Each room features a different part of the design process, from his inspirations to the atelier goings-on to Valentino’s impact on the industry, and will include his couture dresses and sketches as well as footage from the upcoming Matt Tyrnauer documentary “Valentino: The Last Emperor.” The exhibit will hit London Fashion Week after its Manhattan run.

TENNIS’ LATEST VOLLEY: The U.S. Open has found a new playing field and it’s not in Flushing Meadows. Instead, the tournament on Friday opened a pop-up shop at 129 Prince Street in New York City’s SoHo neighborhood. The store, which is on the corner of Wooster Street, will be open from 10 a.m. to 7 p.m., seven days a week, through Sept. 10. It will offer U.S. Open branded apparel officially licensed by the U.S. Tennis Association. In addition, there will be a vintage Tad Davis clothing line that captures the spirit of the 40th anniversary of the Open era, cobranded by Under Armour. A limited edition 100 percent organic cotton U.S. Open T-shirt designed by Heidi Klum also will be available. Klum’s design features butterflies drawn with her children’s crayons, where the body of each butterfly is a tennis ball. The 2008 U.S. Open, which started Monday, is being held at the USTA Billie Jean King National Tennis Center in Flushing, N.Y., through Sept. 7.

FOOTLOOSE: “I had the feeling that I was near someone like Gandhi,” marveled Ines de la Fressange who, along with Carla Bruni-Sarkozy, made a date with the Dalai Lama in the south of France’s Roqueredonde last week for the blessing of a Buddhist temple. Seeing the French countryside ablaze with Tibetan prayer flags was an extraordinary experience, de la Fressange said, recalling the Dalai Lama’s arrival. “He was supposed to come by car and suddenly decided to arrive on foot. When you imagine the importance of such people, it’s quite amazing to see what a humble and simple attitude they can have,” she said, adding that all of the visitors, including Bruni-Sarkozy, had to remove their shoes before entering the temple. De la Fressange sounded less Zen about French President Nicholas Sarkozy’s decision to decline attending the event following China’s request. “It’s ridiculous,” she said. “French people are known for disobeying [orders].”