The designer said his actions were misinterpreted.

The Internet was very upset with Philipp Plein over the weekend.

The designer presented his fall collection in Milan last weekend and paid tribute to Kobe Bryant and his daughter, Gianna, with purple and gold-encrusted hoodies and jerseys bearing the number 24, Bryant’s second jersey number and Plein’s name in the Los Angeles Lakers font. The extravagant show also had gold Philipp Plein-branded helicopters, planes and yacht on set, with the helicopter drawing the ire of many who were outraged at the thoughtlessness and the capsule collection.

The designer issued a statement on Monday saying, “The catwalk set-up was already planned and designed in November 2019, way before this tragic accident occurred, this is the reason why they were gilded helicopters on the runway. I would have clearly removed them if possible, but it was too late to replace them.”

Many took to social media to express their outrage, claiming that Plein was capitalizing on the tragic accident that claimed the lives of the Bryants and seven of their friends and teammates. The show also commenced days before the tribute memorial for the Bryants.

Regarding the tribute capsule, Plein said he decided to “celebrate Kobe Bryant’s legacy” with the capsule collection “and made clear that profits from the capsule collection will be donated to Mamba & Mambacita Sport Foundation. The first $20,000 have been transferred to the foundation already last Friday, the day before the show.”

The runway show drew a number of celebrities including Olivia Culpo and Jada Pinkett-Smith, who walked the show and wore a hoodie from the capsule collection to take a bow with Plein after the show.

Plein also said in the statement, “This tragedy affected myself and all the world deeply, and I feel that my fashion show has been the best moment to express my respect and admiration or Kobe Bryant, his daughter Gianna and his family.

“It is sad to see how something positive and constructive can be misinterpreted by people who obviously want to interpret negatively without even having a reason. As a matter of fact, I am ‘really’ doing something to help and to support the foundation.” The words “I am” and “really” were underlined in pen. He closed saying, “Actions speak louder than words,” with an exclamation point written in.

Plein had also received backlash in the past for Black Friday ads that depicted a murder victim in slasher horror film with the captions “Time to kill some prices” and “price killer.” The ads ran the day before the International Day for the Elimination of Violence against Women. 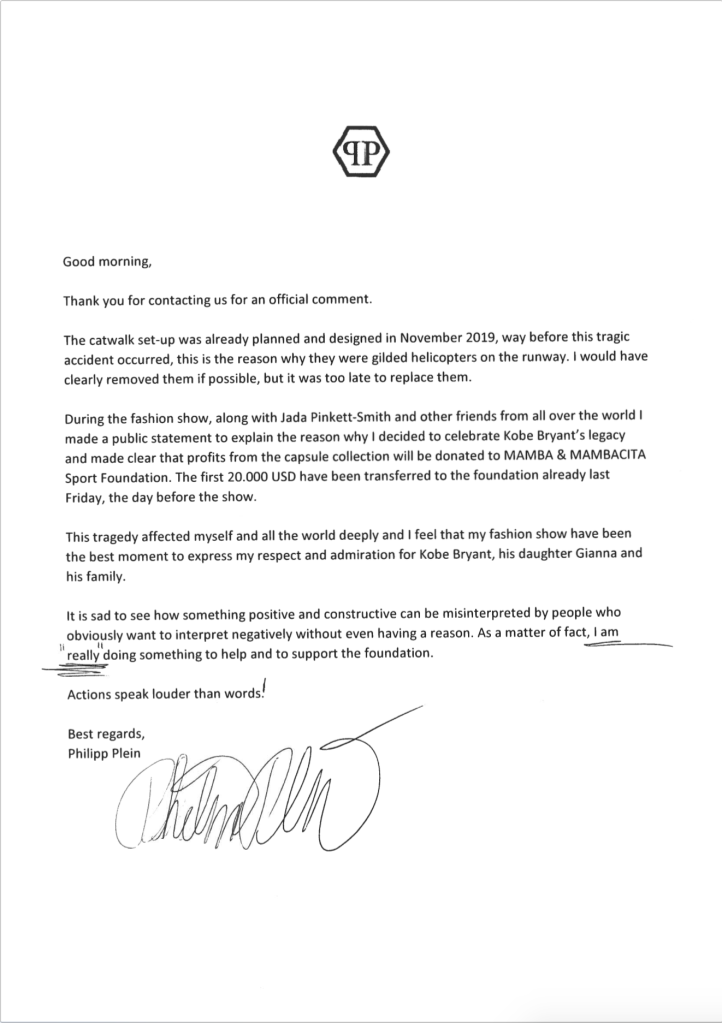 The statement from Philipp Plein for his tribute to Kobe Bryant.  Courtesy Photo