The designer has relooked the hotel's fine and contemporary restaurants plus bar.

By Laure Guilbault on May 3, 2016
View Slideshow 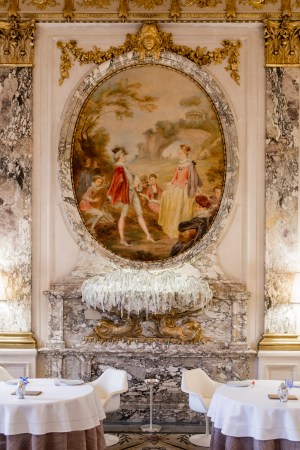 Nine years after the designer left his touch on the Paris hotel, Le Meurice general manager Franka Holtmann entrusted Starck and his daughter Ara with a new task.

“Competition is increasing,” said Holtmann, referring to Paris’ hotel market during a press conference held Tuesday at Le Meurice with the Starcks and French chef Alain Ducasse in attendance. The much-anticipated reopening of the Ritz Paris, just a stone’s throw from Le Meurice, is slated for June, and Hôtel de Crillon’s reopening is set for 2017.

“It’s dangerous to give me ‘carte blanche,’” he said. “How to make rock ’n’ roll such a prestigious institution? There needs to be ambition, but most importantly an immense respect. It’s not about one designer’s performance.”

Instead, Starck worked with Murano, Italy-based artist Aristide Najean on glass pieces, such as drops falling from lamps and a modern sculpture shaped like a holy water basin, which give poetic and whimsical touches to the decor. Starck also lowered the counter at Bar 228, a fashion crowd’s favorite, and is at work on frescoes lining the bar’s walls.

The total cost of the renovation was 1.8 million euros, or $2 million at current exchange, according to Holtmann.

Ducasse, who took over Le Meurice’s kitchen in 2013, spoke about a “marvelous and delicious” proposition for the menu, with new Mediterranean-inspired fare and a full range of plates to share at Le Dalí. Earlier this year, he tapped Jocelyn Herland as executive chef. (Herland has worked at Ducasse’s signature restaurant at the Dorchester Hotel in London, which scooped three Michelin “macaroons.” And later this year, Ducasse is to open Ore, a restaurant in the revamped Pavillon Dufour at the Château de Versailles.)

Starck remains busy, too, plotting the September launch of fragrances he created with three perfumers, and is working on the design of two Paris hotels, including one in the chic 16th arrondissement. The second collection of sandals Starck created for Brazilian footwear brand Ipanema has just hit stores.