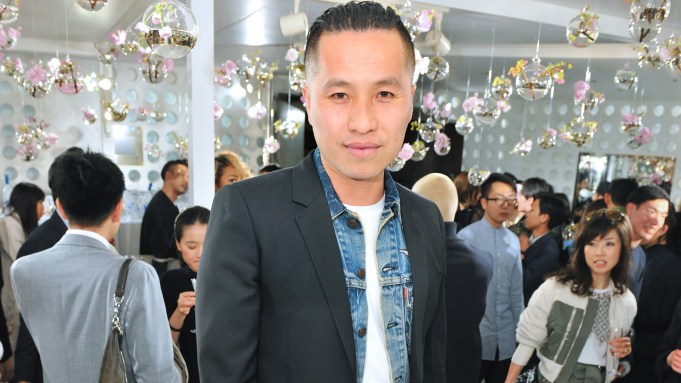 TOKYO — On the first stop of a trip in Asia, Phillip Lim is in the Japanese capital celebrating his brand’s ten-year anniversary with a special installation in his store, located in the Aoyama district.

“Japan was the second flagship store we ever had after New York, so after the show in New York in spring we decided to come back and kind of retrace the steps of our path after ten years. This is the second installation of this ‘Stop and Smell the Flowers’ journey,” the designer said. “And tonight we created this idea of showering cherry blossoms, and cherry blossoms to Japanese are so symbolic and important. It’s like spring, death and new life.”

Lim worked with Japanese flower artist and “plant hunter” Seijun Nishihata, who filled glass orbs with water, arranged them with sprigs from three different types of flowering cherry trees, and then hung them from the ceiling of the store at various heights. The installation will be on display in the store for one month starting Wednesday.

Lim said that Japan is significant to his brand not just in a business sense, but also in a creative one.

“This past fall’s inspiration was Japanese, basically; Japanese objects, culture, art. And I always find myself coming back to this source of inspiration because it represents something so much deeper than on the surface,” he said. “I feel like in another life I was Japanese perhaps, and the way they wear clothes here is like no other because they approach it in such a naïve way. It’s almost like the passion of getting dressed and just putting on anything together. For a designer it always proposes something new, something that I’ve never thought of because of fear, or [thinking] you shouldn’t do it, but the way they do things, it’s almost like, oh why not?”

Following his stop in Tokyo, Lim will be heading to Hong Kong, where he will host a photo installation and work with his team on a community outreach program in a public garden.