The creative director of Celine wins the top prize. 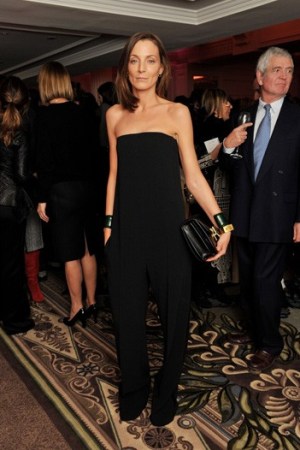 LONDON — “No, I can’t stand next to Claudia Schiffer for a photo — she’s too beautiful,” said Alexa Chung on Tuesday night as she quickly scooted away from a hopeful Hello magazine photographer.

Chung nabbed the award for British Style at the 2010 British Fashion Awards, held this year at the newly refurbished Savoy Hotel on another freezing cold evening here.

This story first appeared in the December 8, 2010 issue of WWD. Subscribe Today.

Erin O’Connor, dressed in a vintage, off-the-shoulder tea dress, seemed unfazed by the chill winds of December. “That’s because I’ve got my big, old coat to wear on top,” she said, pointing to a dark green number with a leopard collar.

Later that evening, Phoebe Philo, the creative director of Celine, won the top award —Designer of the Year — beating nominees including Christopher Kane and Erdem Moralioglu at the annual ceremony organized by the British Fashion Council.

Grant thanked his staff for sticking with him “despite the miserable Dickensian wages. And if nothing else, I’ll be cycling home tonight.”

This year, two new awards were added: Naomi Campbell won the Special Recognition Award for her 25-year career, and Burberry walked off with the Digital Innovation Award.

Lara Stone, who won the Model Award, said she was hoping it would finally give her some public recognition.

“When I walk down the street with my husband [David Walliams], people ask me if I’m Matt Lucas,” she said, referring to the fat, bald actor who stars in “Little Britain” alongside Walliams.