The jury, which included Donatella Versace herself and Vogue Italia’s editor in chief Franca Sozzani, handed out first prize to Adrien Nebel. 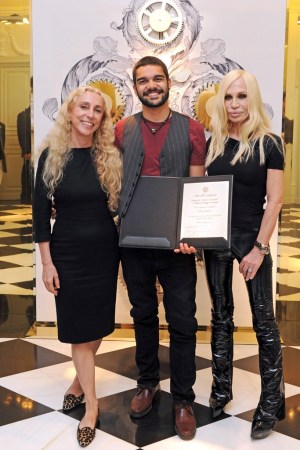 PICKING TALENT: Versace keeps investing in new talent. On Thursday at the company’s Milanese headquarters, Donatella Versace revealed the winner of the Versace Watch Talent Contest, organized in collaboration with the Ecole d’arts appliqués of La Chaux-de-Fonds. After having analyzed the projects of 12 students from the prestigious Swiss watchmaking university, who were asked to design the new Versace women’s watch, the jury, which included Versace herself and Vogue Italia’s editor in chief Franca Sozzani, handed out first prize to Adrien Nebel. The designer, 22, realized Crepuscolo degli dei, a totally black watch showing a chain connecting the timepiece with a ring decorated with Versace’s Medusa logo in relief. The watch, which features the dial in sun-brushed silver and a glossy leather strap, will be produced by Vertime, the Timex Group unit comprised of the Versace and Versus brands, and will be included in one of Versace’s timepiece collections.

“I liked the innovative aspect of the project,” said Versace. “The idea of connecting the watch and the ring with a chain was really new and cutting-edge.”

Nebel will receive a cash prize and will have the opportunity to do a three-month internship at Timex Group’s Design Lab in Milan.