Called “The Legendary Images: Great Photographers and Dior,” the exhibition is scheduled to run from May 3 through Sept. 21. 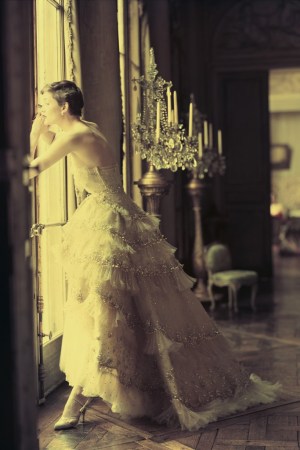 PICTURE PERFECT: Christian Dior is celebrating its visual heritage with an exhibition called “The Legendary Images: Great Photographers and Dior.” The show, scheduled to run from May 3 through Sept. 21 at the Christian Dior Museum in Granville, France, will depict the couture house’s style as seen through the lenses of 80 of the world’s most famed photographers, including Richard Avedon, Cecil Beaton, Erwin Blumenfeld and Irving Penn. The exhibit spans more than

60 years via 200 images, 60 haute couture dresses as well as a number of archival documents.

Next to the house’s glamorous ad campaigns, including model Daria Strokous’ famous stroll through Versailles’ Hall of Mirrors shot by Inez van Lamsweerde and Vinoodh Matadin, the photos will also include lesser-known images: There is a Cecil Beaton portrait of Monsieur Dior in his Paris townhouse, for instance, as well as the ensemble of the couture atelier’s seamstresses posing for Patrick Demarchelier in front of the brand’s Paris flagship.

A 152-page tome of the same title, due to be published on April 30 by Rizzoli, accompanies the exhibition.