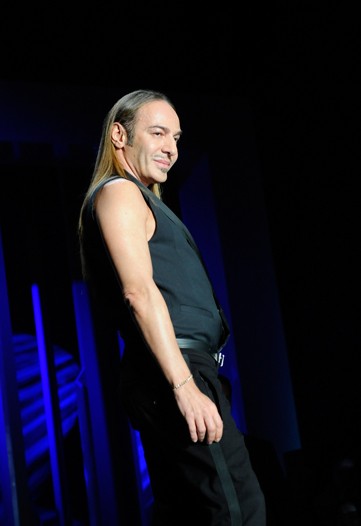 GOTHAM GALLIANO: With numerous ups and downs on his impressive résumé, John Galliano sure has lots of advice for emerging designers. And he is about to share some of it: Galliano will be the keynote speaker at this year’s CFDA/Vogue Fashion Fund gala at Skylight Studios in Manhattan on Nov. 17. The event will mark the fund’s fifth anniversary, and Galliano is expected to talk about his career, some of his experiences, and how he got to where he is today. The winner and two runners-up for this year’s fashion fund will also be unveiled at the dinner gala.

TWIN STANDARDS: Possibly the youngest buyers in Paris, 15-year-old twin sisters Haya and Sama Abukhadra peered out beneath matching cascades of curls at the Colette Dinnigan show Saturday. The siblings were scouting for their mum, Rula Abu Khadra, who runs The Art of Living fashion store in Riyadh, Saudi Arabia. “We help when she doesn’t have the time to come to the shows,” said Haya, explaining that if a collection wins their seal of approval, mum then goes to visit the showroom. And do they have exactly the same taste? “Yes,” they chorused, adding Hussein Chalayan was their favorite.

FERRAGAMO AUCTION: Salvatore Ferragamo SpA feted its Pentominium Penthouses residential project in Dubai on Monday evening, with a dinner, fashion show and auction featuring a pair of sparkling one-off products, designed specifically for the occasion: the Marisa Diamonds Edition handbag in ruby red crocodile skin with a diamond-encrusted clasp and the white gold and ruby-studded Chrono automatic GMT 44M watch. The event celebrated Ferragamo’s deal with Trident International Holdings to design 16 penthouses in the world’s tallest residential building, the Pentominium Tower, in Burj Dubai. The apartments will occupy the last 16 floors of the 1,840-foot-tall skyscraper. Proceeds from the auction went to the Rashid Pediatric Therapy Center in Dubai, which helps children with mobility difficulties.

ART JOINS LUXURY: Mercury Group, the Russian luxury company whose interests include Moscow’s Tsum department store and the Tretyakovsky Proyezd, a street of luxury stores in Moscow, has taken a controlling stake in art and auction house Phillips de Pury & Co., and will enter into a strategic partnership with the house, Phillips de Pury said Monday. “We have seen tremendous growth in the company over the last four years, and this partnership with a major player in the luxury sector will allow us to provide a unique platform to new and fast-growing markets,” said Simon de Pury, chairman of Phillips de Pury. “Russia has clearly emerged as an important art market and there is no doubt that my vision for the company and Mercury Group’s vision are aligned.”

De Pury will remain chairman and will continue to be “an important shareholder,” in the business.

A spokeswoman said she expected “synergies down the line,” between Phillips de Pury and Mercury’s retail businesses in Russia.

GREEN ACRES: America’s morose real estate market just got a vote of confidence from none other than Karl Lagerfeld, who has swept in and bought himself a six-bedroom, 1840 landmark building on an island in Lake Champlain, Vt. — sight unseen (although he’s got photographs). “I love it. It’s very much Emily Dickinson,” Lagerfeld said backstage at Chanel, describing a landscape not unlike the north of Europe, from which he hails. The designer is already plotting a decor worthy of a Vilhelm Hammershøi painting — and perfect for a fashion campaign. “I’ll start doing the Chanel campaigns there,” he said.

SEATING PLAN: Bruno, the camp television reporter played by Sacha Baron Cohen, drew the wrath of guests at Jean-Charles de Castelbajac’s show, but they have likely become the latest stars in the comedian’s forthcoming spoof fashion film. Dressed in a brown leather outfit with a bright red thong peeking out from his trousers, Cohen repeatedly tried to claim a front-row seat before planting a fold-up chair in front of his supposed spot, much to the anger of the audience, who did its best to remove him. As the models strutted down the runway, Cohen tried showing them his invitation to prove the seat was his, before trying to eject guest Joseph Carle. “He came over and said my mother was on the phone, that she was sick and I had to go home,” said Carle. “I knew she wasn’t because I only spoke to her this morning,” he continued, luckily seeing the funny side.

Backstage, where Cohen disappeared three times during the show, some staff members were fuming, others had been desperately trying to get Cohen’s autograph. The night before, Cohen was acting up outside the Givenchy party. Wearing a blonde wig, a skull and crossbones neckerchief, an open shirt and very tight pants, he lambasted the woman at the door with the guest list. “This bitch of an egomaniac drama queen — everyone follow me,” before turning on his heel and sashaying down the street. Rumor has it that Bruno will strike Moscow Fashion Week next.

NORA’S ARC: Chanel has adopted a new mademoiselle. Nora Arnezeder, the 19-year-old French actress who sat front row at the house’s show Friday, is being dressed by the brand for the promotion of her first film, “Faubourg 36,” in which she plays a cabaret artist named Douce, or Sweety. “It feels rather special to be here,” said the rising star, who was raised in Aix-en-Provence before heading to Paris to study at the International Academy of Dance, Song and Theater. “I’m more a jeans-and-sneakers girl at heart,” she whispered, adding she spent hours listening to Edith Piaf and Charles Trénet records in preparation for her role. The most powerful moment of filming? “Performing with a 100-strong troupe in a reconstructed Thirties theater set in studios in Prague. I felt totally transported,” said Arnezeder.

Other guests included Dorothy Walker Stapleton, wife of the U.S. Ambassador to France, and former French first lady Bernadette Chirac, who discussed the U.S. vice presidential debate. “[Sarah] Palin did well. I was very proud of her,” Stapleton could be overheard saying. Spanish actress Pilar López de Ayala said she’s looking forward to a whirlwind promotional tour for a trio of new films, for which she has Chanel outfits lined up. López de Ayala is now living in Paris in a bid to learn French. Also there were fellow “Harry Potter” stars Clémence Poésy and Emma Watson; Virginie Ledoyen, who said she turned Resistance fighter for her latest film, “L’Armée du crime,” and Laura Smet, who teased she has a fashion project up her sleeve.

NATORI CROSSES THE BRIDGE: Despite the vice presidential debate, Josie Natori drew a crowd when she introduced her first ready-to-wear line, Natorious, Thursday night at Saks Fifth Avenue Beverly Hills. Co-hosts Brooke Davenport, Wendy Goldberg and Liane Weintraub were decked out in the colorful silk charmeuse tops that make up 75 percent of the line, most of which retails between $300 and $500. “In these times, especially, it’s important for a line to be well priced,” said Larry Bruce, vice president and general manager of Saks Beverly Hills. “We’re giving women what they want.”

Natorious is merchandised across from Tory Burch on Saks’ fourth floor, a better contemporary-designer hybrid that the store refers to as “modern” rather than “bridge.” “This way, women can buy two, three or four pieces instead of just one,” said Natori, 61. “It’s really about a lifestyle, for twentysomethings to women my age.”

LATE LADIES: There was a scramble for front-row seats at Yves Saint Laurent Thursday. First, Claudia Schiffer snuck in at lights-down, followed by Catherine Deneuve just as the music began, and later Emily Mortimer, who had to stand at the back. “We were so busy scoffing Champagne backstage we didn’t realize,” Mortimer confessed. The actress wrapped a Martin Scorsese movie this summer, plus “City Island” alongside Andy Garcia, and next is shooting “Harry Brown” featuring Michael Caine, in which she plays a policewoman. “It’s set in a housing estate in England, where there’s this vigilante old man. It’s kind of a Western and I’m the Tommy Lee Jones character,” she said.

Actor and director Guillaume Canet said he’s starting to shoot his next movie, “Last Night,” a love story, alongside Keira Knightley and Eva Mendes, in New York in two weeks. The supermodels gathered across the way, meanwhile, including Stephanie Seymour, Schiffer and Naomi Campbell, whose hands were covered in diamond rings, one a giant curly snake. “They’re my rings from my personal collection and I don’t talk about my private life,” she said, before knocking her purse to the floor, spilling its contents.

Seymour, who will be traveling to Asia next month to promote her Dior skin care campaign, said she was checked in at chez Azzedine Alaïa. “I love to stay there and watch him work, it’s like a family,” she said.

WALTZING MICHELLE: It’s been a year of creative collaborations for Paris-based Australian designer Michelle Jank. In April, a short film created by Australian brothers Jordan, Lorin and Daniel Askill provided the backdrop to Jank’s Australian Fashion Week comeback show. Jank then traveled to remote Australian Outback locations to style woollen yardage into ballgowns for Australian Wool Innovation’s relaunch campaign. And now, on Wednesday, comes the world premiere of the Sydney Dance Company’s latest production, “Sid’s Waltzing Masquerade,” a new work by New York-based Canadian choreographer Aszure Barton, with costumes by Jank. She’s the third high-profile fashion name to recently partner with the company, following collaborations with Imitation of Christ’s Tara Subkoff and Akira Isogawa. Jank’s first theatrical foray delivers more than 60 costumes — most showcased on the company’s female dancer. The outfits include sculpted Powernet bodysuits layered under bondagelike elastic harnesses and a finale of full-skirted silk georgette ballgowns in a sugared almond palette. “You can see the girls moving over the floor like a cloud,” noted Jank, who also incorporated some of her trademark Perspex jewelry, which sells through Colette and Dover Street Market.

Upon being commissioned by the Sydney Dance Company, five Australian fashion and costume designers were recommended to Barton — including Josh Goot — but the choreographer quickly settled on Jank. Barton, the artist-in-residence at New York’s Baryshnikov Arts Center, revealed that she and Jank hit it off so well, they are now cooking up future collaborations. Noted Barton: “We’d like to do something in North America — New York, possibly. We’re at the beginning stages of just planting a bunch of seeds.”