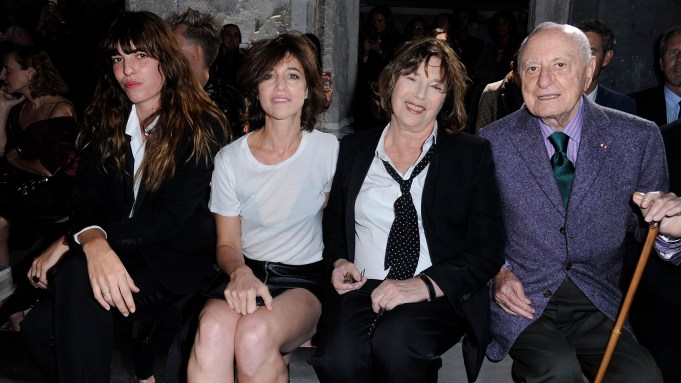 UNDER THE MICROSCOPE: Among the guests at Anthony Vaccarello’s debut show for Yves Saint Laurent on Tuesday evening was the man who stood to be his harshest critic: the late couturier’s lifelong partner Pierre Bergé — who also happens to be a close friend of Vaccarello’s predecessor, Hedi Slimane.

Before the show, the businessman hedged his bets. “Look, I don’t know the work of Anthony Vaccarello. I would never compare Hedi Slimane’s work to anyone else’s, or Vaccarello’s to anyone else’s. You know I think Hedi is hugely talented, he’s a personal friend, but I have high expectations of Anthony and I’m prepared to recognize him if he has the talent required for Saint Laurent,” he said.

Apparently, Vaccarello passed his audition with flying colors. “My first impressions are very good, but I’m not surprised. I have known Vaccarello for a long time, I gave him a prize as president of ANDAM,” Bergé said after the show.

He singled out the tuxedos and sheer shirts exposing bare breasts. “Mixing all of that is coming back to Saint Laurent,” Bergé remarked. The house signaled its allegiance to brand codes by suspending a giant neon sign in the shape of the YSL logo, designed in 1961 by Cassandre, in the courtyard of the show venue.

Among the guests were several longtime supporters of the brand, including Jane Birkin, flanked by her daughters Charlotte Gainsbourg and Lou Doillon. The family has rarely been seen in public since the death of her third daughter, Kate Barry, in 2013. Gainsbourg has since moved to New York with her husband Yvan Attal and their children, while Birkin has battled health issues.

“I knew that if I wanted to see Charlotte, I had to see her tonight because tomorrow she flies back to New York and she got here last night — so it’s a very good excuse,” said Birkin, who is gearing up for a series of concerts in France and Switzerland as part of her “Gainsbourg Symphonique” tour.

The British actress, famous for her androgynous style, was wearing a black Saint Laurent trouser suit with a white shirt and dotted silk scarf — the same outfit she’s stepped out in at the Cannes Film Festival for the last two years. “They are extraordinarily generous,” she said. “They even made me a collar for my dog.”

Gainsbourg is filming “Ismael’s Ghosts” opposite Marion Cotillard and Mathieu Amalric. Asked about director Arnaud Desplechin’s fondness for portraying dysfunctional families, she soberly replied: “Yes, that’s right.” Doillon let out a nervous laugh, as Birkin wondered: “I wonder where he gets that from?”