"The Sculpted Dresses of Noureddine Amir" is the last exhibition at the Fondation Pierre Bergé–Yves Saint Laurent before renovations. 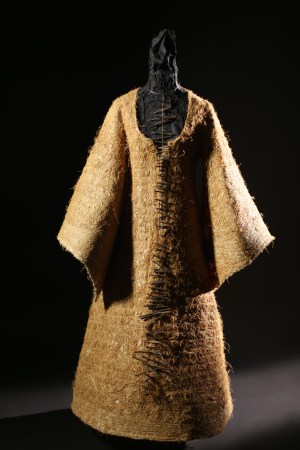 DRESS REHEARSAL: For its last exhibition before closing down for renovations, the Fondation Pierre Bergé-Yves Saint Laurent is showcasing the sculpted dresses of Noureddine Amir. The Moroccan artist’s creations appear dramatically lit against a black backdrop in the exhibition, which runs until April 3.

“It’s the last one before the renovation,” said Bergé, who stood near the entrance greeting guests at a cocktail on Tuesday evening. The space is due to reopen next year as a permanent museum, and visitors will have access to Saint Laurent’s studio and the former couture salons for the first time.

Bergé has auctioned off his collections of rare manuscripts and fine wines to funnel money into the project.

“It will be the most spectacular [museum] any designer has ever had, since to my knowledge, there is no museum today dedicated to a single designer, if you don’t take into account fake designers or people — Italian or otherwise — who believe they are great designers,” said Bergé.

Saint Laurent’s former business partner said he discovered Amir’s work at the Arab World Institute and subsequently met him in Marrakesh. This was Amir’s first solo exhibition in France.

“I think it’s important to give a helping hand to young people, but not fashion designers. This is something different, although he does work with fabrics and marvelous materials. I think he has a huge amount of talent,” Bergé said.

Amir has designed costumes for theater and film, namely for Iranian artist Shirin Neshat, and has shown clothing collections on the catwalk during Casablanca Fashion Week. His work has been exhibited at the MoMu Fashion Museum in Antwerp, Belgium, and the Fine Arts Museum in Lille, France.